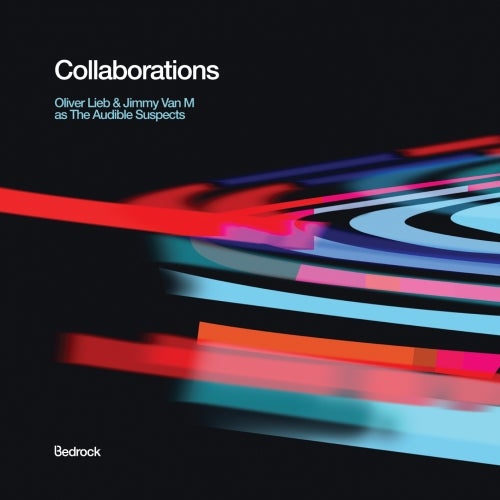 Germanys Oliver Lieb and USAs Jimmy Van M have come together as The Audible Suspects to launch Collaborations, a new creative platform for Bedrock in 2012. This project is the culmination of a journey over many years, through Jimmys pursuit of Olivers music, resulting in their friendship and now this collaboration. Many years ago Jimmy was among the first people to bring Oliver to the USA to play and was the first to arrange a tour for him to perform live and now the time is right for The Audible Suspects to be born. "After my break from producing, I was slowly getting back to working again and one of the first steps was to care about my online presence, Facebook etc. I added Jimmy, making contact again and soon we talked about working together on some projects. and quickly had the idea of doing a compilation. Like my monthly podcasts, I wanted to gather together new, interesting music from well-known and more underground or undiscovered people and focus on the techy side of things, which actually is my main playground. So, our collaboration is based on grooves and interesting sounds, as well as melodies, that dont just aim for big commercial success but more for some exciting trippy development of audible space." - Oliver Lieb Frankfurt based DJ & producer Oliver Lieb has been in the premier league of electronic producers since the late 90s and always keeps surprising and amazing people with his extraordinary sounds and diversity of styles. He views music as an endless horizon of expressing himself and refuses to be pigeonholed in one specific genre, an attitude well suited to the Bedrock ethos. The mighty, soaring, Parallax, was a highlight on John Digweeds Structures Two album, and the exceptional Epsilon Eridani EP (Bed99) followed last summer. So it is fitting that both an unreleased Reprise and Italian producer Davide Callis remix open and set the stage for this collaborative musical adventure. From the outset the selected music emulates a night out at a club with a top quality underground soundtrack, digging deep and blending subtle sparseness with hypnotic drive, teasing and building anticipation and excitement with ease. Jimmy Van M exhibits his superb remix skills reworking Origins by German techno producer Ray Kajioka, which flows seamlessly into BPitch Controls rising star Thomas Mullers One Hit One Night and on into Get Physicals Pele and Findling. Oliver and Jimmy continue to join the dots between the most exciting, talented, new producers and remixers as they feature the wildly creative Max Cooper, Andreas Mügge, in his D.Diggler guise, Daso Franke and the excitingly experimental Lanny May. "Flow is very important. I connected with Oliver on this right from the beginning when listening to his LSG Vol. 2 and LSG Into Deep albums. Over the years weve become friends and Ive always hoped for an opportunity to work together. So, The Audible Suspects project is very exciting for me. When getting the music together for this compilation we quickly realized where it was going and took the direction of strong yet still simple tracks. We focused considerably on the sound quality of each track and the final mix mastering which you can tell by turning it up loud! " Over the last decade and a half few individuals could claim the type behind-the-scenes influence on American dance culture as Jimmy Van M. His tireless efforts can be credited with having helped advance electronic dance music throughout the North America, opening avenues for artistic expression in dance-clubs that did not previously exist before him and his very unique efforts. When it comes to atmosphere, vibe and drive there are very few DJs that can stand alongside Jimmy Van M. The mix builds in intensity with San Francisco duo SF/FM blurring the lines between the obscure and the straight forward, with their love of big room psychedelia, slipping effortlessly upwards with Traums Ryan Davis and Irelands Phil Kieran (who is later joined by Green Velvet for an encore performance). Swedens hugely talented techno DJ and producer Joel Mull shows off his star potential, as does the mysterious Digital Mess, before the unique sounds of Munichs Tobias Felbermayr spiral into the mix finale of Helios by Oliver Lieb.This is a mix that exhibits the best underground dancefloor attitude without sacrificing the electronic weirdness that sometimes gets lost in the pursuit of big-name tunes. There is a sense of musical maturity to the mix without it lacking in energetic charm. Its mix that is born out of desire to discover, excite and educate, and attitude that comes as the result of many years of waiting and searching for, that next inspirational track. "Jimmy and Oliver have delivered a futuristic mix that locks you into a groove and wont let go. This is cool electronic house meets spacious techno." - John Digweed