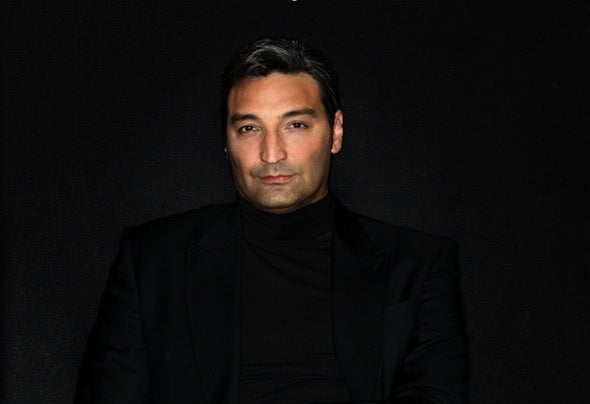 There are producers whose work is immediately associated with success, and whose talent for seeking out new national and international voices is celebrated. In Germany there are only a few such figures in the music industry. Of these, there are even less whose Discography reads like a “Who’s Who” of the music scene. Mousse T. is one of those very few, whose songs “Horny” and “Sex Bomb” have provided a good example of the power harnessed when intuition and precision come together. But who is the person behind these productions which consistently find their way into the charts? Mustafa Gündogdu, alias Mousse T., born in 1966 in Hagen, Germany, describes his success succinctly: “I am a music lover with humour, who gives more than 100% for his love”. This love of music brought him to Hanover in 1990 where he set up his own studio while he was still keyboarder for the band “Fun Key B”. Two years later he gets to know the owner of Peppermint Park Studios and extends the label into dance floor music. At the same time, Mousse T. pursues his ongoing passion for DJing with great enthusiasm. In 1993 he founds, along with the owners of Peppermint Park and his partner Errol Rennalls, the label “Peppermint Jam Records” at a time when Mousse T. is starting to make a name for himself as a DJ on a wider stage. Several productions with international greats such as Ziggy Marley, Mezzoforte and Randy Crawford are the consequence. In 1998 the single “Horny” catapults the name “MOUSSE T.” into the international charts and establishes him as a solo artist. In the same year, further productions for musicians including Michael Jackson cause a sensation and bring him a Grammy nomination as “best re-mixer”. One might be forgiven for thinking that Mousse T. would rest on his laurels after such outstanding success. Quite the contrary: His curiosity for experimenting with new musical variations combined with his outstanding creative ability has driven him on. “Of course I feel very proud when I look at my Discography. But success for me is important mainly as a basis on which my further work as an artist can flourish. Apart from that, success is, of course, a great motivation and source of energy so that I can continue to give “more than 100%”.” This creativity and variation can also be seen in his new album “All Nite Madness”. “As far as my music is concerned I try to implement new ideas, and my love of music doesn’t draw a line at any particular musical style. So I try to mix lots of styles and develop interesting new songs and sounds that way.” These thoughts are also the basis for the choice of artists on the new album, which includes Emma Lanford, Kathleen Chaplin, Roachford and Calvin Lynch. Mousse T’s preference for a mixture of styles is clearly evident: “It is obviously important for me that the singers with whom I work have a fantastic voice, but they also have to have their own unmistakeable style. If, over and above that, they are great people, then we can do business.” The fact that MOUSSE T. values people so highly is shown in his effectiveness when working in a team. Regardless of a person’s stature, whether one of the music greats or an unknown musician, if the chemistry is right the cooperation flourishes through humour and enthusiasm and with the degree of discipline necessary for the implementation of creative ideas. During the frenetic phase of a track’s production, MOUSSE T.’s producer side emerges, as he controls from the background. However, the first hearing of new creations takes place in his closest circle, mostly with partner Errol Rennalls, with whom he also writes songs. “Errol and I normally function as the “idea’s man” and the “hook line man”. I often give a certain key word or topic and Errol fills this initial musical framework with meaning.” This perfect synergy can also be found on “All Nite Madness”. Whether you take the first single of the album “Is It ’Cos I’m Cool?“, the soulful “Monotony“, “Turn Me On“ with Kathleen Chaplin’s crystal clear vocals or “Underground“ on which ex-Stranglers frontman Hugh Cornwell lends his voice – the integrity of the creator’s style is evident on every track. The single „Is It’ Cos I’m Cool?“ has already developed into a huge hit in Germany and emphasises once again the enormous potential of MOUSSE T. songs. The LP, released on 5 April 2004 will captivate music lovers of a wide-range of styles. Mousse T. continues to deliver the goods in 2005. Right on time for the release of the ipod Mousse T. Special Edition in early november he will release his new single “Horny As A Dandy” with a new album following in 2006. After a few selected promo-gigs for his ipod Mousse T. will promote the new releases with a long clubtour throughout Europe.