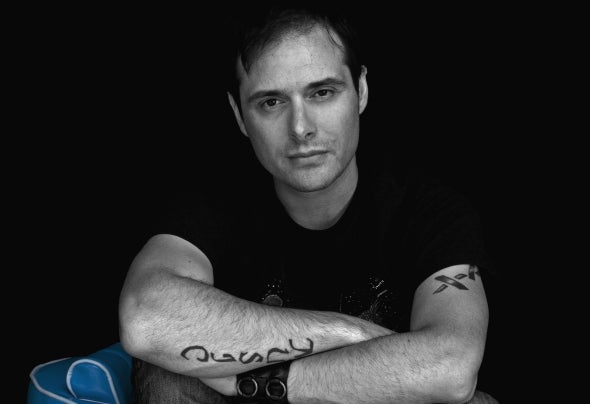 Pole Folder knows good club music. As one of Belgium's top electronic musicians and DJs, this Brussels-based artist has consistently lit up dance music since 2001 when he led Europe's early progressive house scene. Since then his evolution has seen him crowned Belgium's Best DJ (2010), dazzle audiences with an impressive, multi-instrument live show, and build a family of talented electronic music producers via his highly respected label, Reworck.It is his dedication to quality electronic music and his exploration of new sounds that has seen Pole Folder become one of Belgium's most popular DJs. Today his sound covers everything from melodic techno to heavy house, deep soulful grooves and moving breakbeat pieces, as epitomised by the openness of his imprint. As Reworck approaches its 10th release, the label has proven itself to be an eclectic home for exciting European talent with releases from Berlin- based artists such as Marquez Ill, Ryan Davis, and Sven Jaeger, as well as France's Amine Edge. The imprint is so dedicated to sound excellence, that it uses Cologne studio wizard Robert Babicz to master every one of its releases.Pole Folder's previous life as an influential progressive house producer saw him release music on some of the scene's most prestigious record labels including Global Underground, Renaissance, and Bedrock Records. In 2003, John Digweed commissioned Pole Folder's debut artist album 'Zero Gold' for his label Bedrock, and two years later it was released to worldwide praise from the electronic music media, including Resident Advisor, who gave it a 4.5/5 and described it as, "delicately atmospheric...musically rich...and one of those timeless pieces of music." Several 'Zero Gold' tracks such as 'Faith In Me', produced with vocalist Kirsty Hawkshaw, and 'Salvation On Slavery Sins' were featured on hit US TV shows including Nip/Tuck and CSI. Pole Folder and CP's 'Apollo Vibes' cut was featured in the movie 'Stark Raving Mad', and another one of his hits 'Dust', was used as the backing music for a Channel 4 advertising campaign in the U.K..Since 2003, Pole Folder has toured globally as a DJ and a live performer. His live shows aim to recreate the intricate and precise studio processes behind his music in a club environment with synthesizers, mixing desks, FX boxes, laptops, and live vocalists fashioned by Pole Folder into a succinct club sound. He plays guitar, synths, and trumpet during his live shows, skills that he acquired during a long musical education that began at the age of 5. In 2006, Pole Folder launched 'Destinations' on Frisky Radio, an online radio show that was recorded live at various gigs worldwide. It garnered a huge following and led Frisky to ask Pole Folder to recreate the concept live in the studio for his first compilation, 'Destinations', which utilised both his regular Pioneer DJ set up, and a number of live instruments. His Frisky Radio show has since become one of the most popular radio shows in underground electronic music. Pole Folder launched Reworck in 2010. The label is the embodiment of Pole Folder as an eclectic and cutting edge artist. Its multi-genre releases have been publicly supported by DJ tastemakers such as Laurent Garnier, Hernan Cattaneo, and John Digweed, as well as magazines and web outlets like Raveline and WhatPeoplePlay.