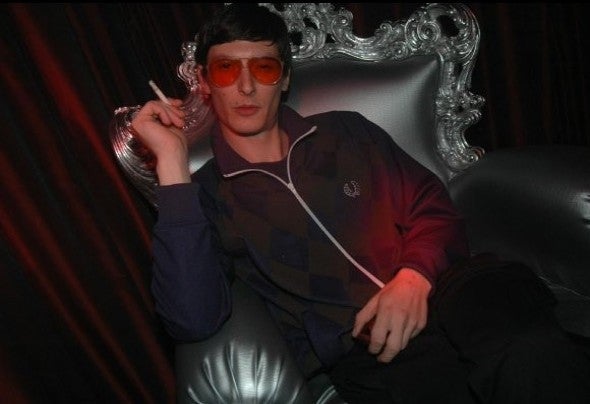 Biography Joseph Disco :The summer of 1979 was a landmark moment in the history of modern music. It was the time when disco died...and a new, evolved Disco was born. In the wake of a musical uprising which saw the revolutionary overthrow of a culture which had, for better or worse, defined a generation, a infant Joseph Disco took his first breaths in Munich, Germany. Historians, philosophers, prophets, and all self-proclaimed Poobahs will forever remain split on whether this was reincarnation, coincidence, a fortunate transmogrification, or the greatest conspiracy known to mankind. However in the midst of endless philosophical and religious debate, they all remain unified on one undeniable point – his music never fails to rock their asses.Joseph Disco’s early education in beat science came as a resident DJ in Cologne’s legendary club Playground, where his regular opportunities to manipulate the dancefloor like a puppeteer quickly drew him into the sphere of music production. Shortly after returning to his native Munich, his first release with the project “DMS” on Great Stuff Recordings in 2005 opened the floodgates for a deluge of well-received releases. As half of the duo Micky Monzza and Joseph Disco, his resume grew to include a series of productions on labels such Great Stuff, Craft Music, Platform B, Stil vor Talent, Pineapple, amongst others. His true breakthrough came with the 2007 anthem “Bounce Baby”, a collaborative house-driven effort with Tobias Lutzenkirchen that gained worldwide acclaim on dancefloors and in countless DJ charts. The duo struck back in 2009 with the follow-up, “Synchro System” on Lutzenkirchen’s own Platform B imprint, once again storming soundsystems and charts across the globe. With his name established amongst electronic aficionados, Joseph has gone on to entrench himself on the scene as a steadfast proliferator of high-quality works. Sporting an ever- growing cadre of solo releases and remix work on a multitude of labels, Joseph Disco has only given a tantalizing taste of his true potential. Gigs: Dachkantine (Zurich), Hive Club ( Zurich) , Hospital (Sibiren) Noxx ( Antwerpen) , La Mez ( Frankreich) ,Gold Club (Essen)Arena Club ( Berlin), The Garden ( Munchen ) , Thaibreak , Rave on Snow , Love Parade ...links: www.myspace.com/josephdisco www.soundcloud.com/josephdisco www.facebook.com/pages/Joseph- Disco/279279139767 http://www.residentadvisor.net/profile/josephdisco http://www.discogs.com/artist/Joseph+Disco