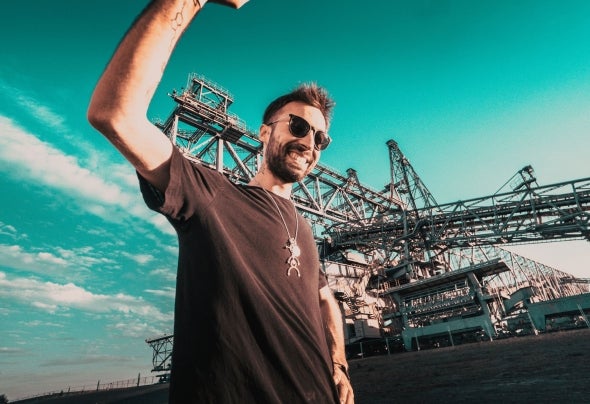 After being enraptured by music, Johnny Kaos is active in the music industry since 2009, collecting various releases with high-level labels in the underground techno scene, including: Sci + tec (Dubfire), Mb Elektronics (Mark Bailey), Bitten ( 2000 and one & Sandy Huner), Suara (Coyu), Agile recording (Uto karem), bla bla (Daniel Sanchez), 1605 music therapy (Umek), Night light (Sinisa Tamamovic), Deeperfect (Stefano Noferini), KD music ( Kaiserdisco), Amazing records (Many Reasons aka Minicoolboyz), South American sound (John Acquaviva), Stick recording (Alberto Ruiz).After receiving positive feedbacks from many of the best djs, the artist reach a dozen charts on the best world-record sales platforms and later he performs as a DJ in many clubs and festivals all around Europe.He has collaborated with many big artists, including: Sam Paganini, Minicoolboyz, Hollen, Spartaque, Ronan Portela, Luca M & Just ,2 Metodi Hristov, Alex Costa, Groovebox.According to Johnny, music is not just an art, but a real science, so much so that he is constantly dedicated to the study of frequencies and their influence on the human being. The young artist says that if everything in the universe is energy, everything has its own vibration and so consequently everything that vibrates has its own frequency. There are beneficial frequencies that act in the electromagnetic field of individuals, for example the tuning to 432Hz that Johnny supports and uses in most of his record productions.He is constantly looking for new sound dimensions, to make his music original and evolved, always respecting his groovy-techno style, trying to fully conquer the attention of his listeners, oscillating between intense emotions and ardent groove.From 2016 the artist has expanded his creativity moving his residence in Berlin, but he keeps the connection with Italy alive, through gigs and the project of his recording studios: Meet your Vibes (Mastering & mixing, Promotion service, Audio contents).