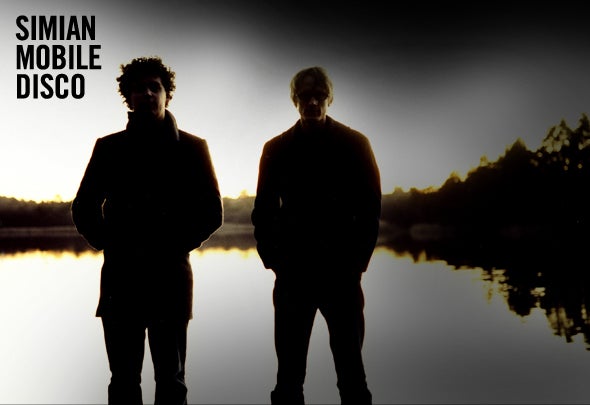 SMD Biography June 2010 It's not hyperbolic bio speak to say that Simian Mobile Disco are one of the most successful electronic music acts around today. It's verifiable fact. Funny thing is, though, the duo of James Ford and James Shaw never planned it that way. Instead, it kind of just happened. The boys started the group on a lark, a side-project from their main group in the mid-'00s, Simian. But as the group imploded on a lengthy tour of the United States, the DJ gigs, remixes and mixes that were once a hobby became a full-time gig. Things have been hectic ever since. Early singles such as "The Mighty Atom," "The Count" and Kitsuné hit "Hustler" led to a 2007 debut album Attack Decay Sustain Release on Wichita Recordings. The record was their breakthrough, adding tracks like "It's the Beat," "Tits and Acid" and "I Believe" to their discography. Perhaps more importantly, it also gave birth to what would become one of electronic music's most talked-about live shows, a celebrated DJing career and respect among their peers for a dedication to an analogue production aesthetic. Their highly improvised live set sees them running circles around a complicated modular rig while their trademark light show pulses along in time, constantly treading the line between crowd-pleasing and cerebral. When the boys aren't playing live, they're spinning records in their inimitable style, which sees them as likely to play heady cosmic jams from Conrad Schnitzler as they are their own stripped down dance floor-oriented productions from their Delicacies label. This is no producers-go-DJ thing either: The duo have released a FabricLive mix CD, hold a regular residency at NYC's famed Fixed party and play regular festival gigs, earning spots at Glastonbury, Ibiza's Space club and Detroit's Movement. It's in the studio where the duo shine, though. As evidenced by the title of their debut record, the reason that their records sound so special is their reverence for analogue equipment. Shaw is the gear head of the two, poring over complicated modular synth patch cables to see where the group's sound might head next. A modular system they call "the Wardrobe" is the key, but they're constantly adding gear to an already overloaded studio. The gear served them well on Temporary Pleasure, the duo's guest-heavy 2009 album, which featured the likes of The Gossip's Beth Ditto, Hot Chip's Alexis Taylor and Super Furry Animals' Gruff Rhys among others. Ford's connections from his work as a producer of bands such as Florence & the Machine, Arctic Monkeys, and Klaxons no doubt helped to ease the duo into the collaborations, and the result was a star-studded affair that was as fun to listen to as it was to make. These days, though, the group is focusing their attention on more specialized pursuits. The live show is as forward-thinking as ever with an added component of video gradually being added to enhance and expand the experience. The aforementioned Delicacies label is the duo's outlet for studio experiments that can be released quickly with little promo or fuss. As a direct result of the label, they've also been Djing and curating a series of events, eager to test the tunes they've just finished days before. A forthcoming mix CD based around their Fixed residency will no doubt showcase what you can expect to hear when SMD come to your city with records in tow. In other words, SMD are busy. Long may they remain so.