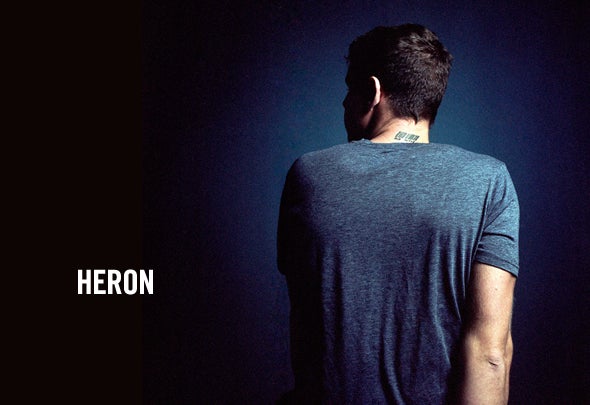 Many times, biographies of techno acts start by singing their praise of an extremely early, extraordinary talent on synthesizers and other electronic devices. In Heron’s case, things are different: Because Martin Spittel has been shaped musically since his childhood, the infuences were as diverse as music can be. On one side, there was his grandfather, who played various instruments, and to whom young Martin related closest to and whose infuence still lasts until today. On the other side there were his cousins who were not much older than himself, enthusiastic about AC/DC, and band members themselves. Over the course of the following years, he explored the diversity of Black, Death and Trash Metal, EBM and Industrial, right up to Detroit Techno. Ever since then, Heron's environment served as compensation to ferce parties and expanding his musical horizon. This symbiosis from the love of nature and the musical infuences from his early childhood are a direct refection of Heron’s entire life. Following the scream of the waders (limicoline birds), he moved to picturesque island Norderney in 2005. There, exploring the island’s national park, he decided to live up to his enthusiasm about nature by going to study landscape ecology at the University of Münster. It turned out: The relocation to Münster was the initial spark for his career; the months in Norderney were inspiration for the name of his label “Limikola” which was founded in late 2008 and now enjoys enormous support by both DJs and fans. After launching his now very successful °Schaltkreis-parties with four friends in mid-2007, everything went quickly: His frst own radio show “The Grasshopper Warbler”, contacts to prominent players like Someone Else and Heartthrob, and fnally the moment in early 2008 during the season’s opening at Time Warp, when Richie Hawtin played all three tracks from Heron’s Retro EP. It was merely his second EP, released on a netlabel (Minisome), and it became immediately successful. A knightly accolade. The two have been in touch regularly since. The journey that Heron started lead to his bombshell track “Welcome to the Adventure Club” that charted in the Beatport charts in 2008, and continued with remixes and releases for Synewave, Supdub, Swap, micro.fon, Prosthetic Pressings and Sleaze Records.