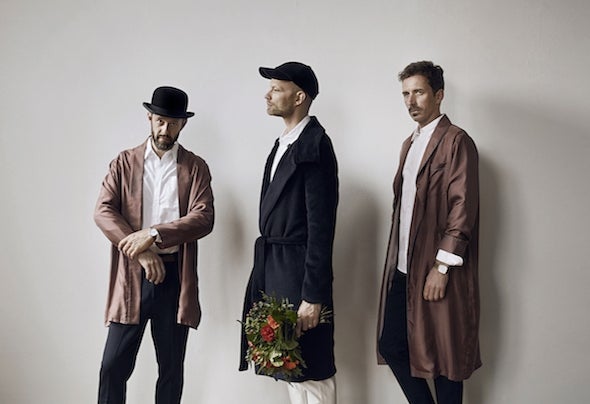 WhoMadeWho may lack a question mark after their name but their music will certainly have you asking after them. The Copenhagen, Denmark trio is difficult to pin down but their music sounds as effortless as it is stylistically and sonically adventurous. WhoMadeWho are on a mission to eschew convention.The band formed in 2003, with falsetto voiced bassist Tomas Høffding coming from the Scandinavian rock underground, singer songwriter/guitarist Jeppe Kjellberg from the avantgarde jazz scene (with beard to match), and drummer Tomas Barfod – who also records as Tomboy – a rising star of electronic music. They released several 12-inches on lGerman disco label Gomma Records, culminating in their eponymous debut album in 2005, which won them a devoted audience who evangelized about their new favorite band, making it the sleeper hit of the year.While touring the globe the band started work on their second album. “The Plot” was released three years later, were it got great reviews across the board, culminating with the “Keep Me in My Plane” video that won a bunch of awards around the globe and was nominated for even more. Because of the lengthy recording process with “The Plot”, the band matured sonically, making it a bit more pop, still with the distinct rock- and electro sound.As a live band WhoMadeWho are an unforgettable, incendiary experience having played alongside genre bending contemporaries Daft Punk, Soulwax, Hot Chip and LCD Soundsystem as well as having their 1st album song “Space For Rent” covered by Josh Homme of Queens of the Stone Age after seeing them rattling bones in their skeleton garb stage out fit. Or as Brooklyn Vegan sums it up after having the band play their pre-SXSW show case in NYC:”(...) they were weird and awesome and won the initially-perplexed crowd over quickly. If you're going to SXSW, they're definitely a "don't miss" band.”Always using a foundation of beats and bass lines, the songs are then written on top, alongside the unusual additions of oboe, castanets, electro-synth or vocal harmonizing that pushes their music into the extraordinary. NME once asked ”God knows what would happen if they got serious?” That time is now! The skeletons are back in the closet. Alongside their extensive touring across Europe and Australia, WhoMadeWho have been working on a third and fourth album at the same time. April 18 WhoMadeWho will release the mini-album “Knee Deep” that will reveal a darker side together with their own take on party music as rumors have it that the Fall full-length album release will be a collection of organic electronically pop-songs.Outlandish getups aside, WhoMadeWho get serious on their new material. As always it will be full of playfulness and pumped rhythms that will put the room on fire and get the party started.WhoMadeWho individually evangelize about 60’s psychedelia, 70’s stoner rock, 80’s mutant disco, 90’s electronica and this have resulted in their warped sound of now. They are so much more than a danceable rock band. They are the spark to a firework display of ideas. And they’re just about to light the blue touch paper for the third time. Don’t stand back! As Seattle paper “The Stranger” wrote after nominating WhoMadeWho’s 2010 South by Southwest performance as the best show of the festival: WhoMadeWho is not only “the rockingest dance band or danciest rock band but both the danciest dance band and the rockingest rock band.”