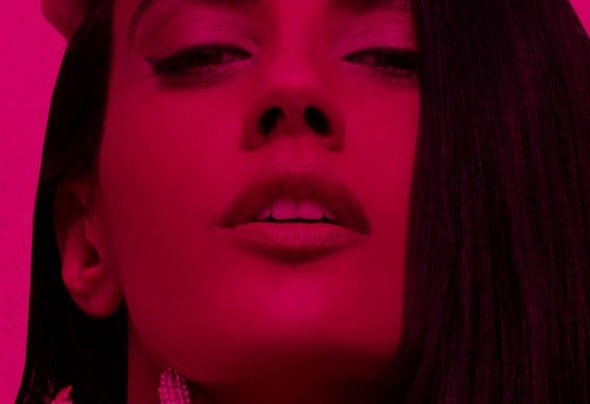 Valentina Black’s music is a mosaic of styles, guided by her magnetic tendency to pull in eclectic influences around her, from contemporary hip-hop, classic soul, funk, and pop, sculpted into her own creations. It’s rejected in her fashion and visuals, a rock and dreamlike aesthetic. Verona-born Valentina has a huge following of over 2.4 million followers on social media with a ready-made global fan-base that has been growing organically at incredible pace. During this time she also worked as a dancer for main Italian broadcast channels (Rai and Mediaset). Her professional career took off a few years later, debuting with Jimmy Carl Black, the legendary drummer from Frank Zappa’s ‘Mothers of Inventions’. Impressed by “her golden voice, a beautiful little angel”, he recruited her for the recording sessions of "Freedom Jazz Dance” as singer and Hammond organ player, under the stage name of Valentina Black. Valentina’s raspy and angelic voice and rhythmic ow has taken her into studios in London, LA, and New York. Her sound has become the pure, impressionable and passionate sound of a London-hearted girl consuming the world rst hand and then expressing it in her own avour. With top selling vinyl releases and chart topping singles and remixes on labels like 'Toolroom, KMS Records, Moonbootique, Dvine Sounds, Juicy Music, Groove On, Frequenza, King Street, Moveubabe Music', Valentina Black is one of the most exciting electronic music producers and DJ / live acts to hail from Italy. She has opened for international DJ's like Fritz Kalkbrenner and many others, and released more than 70 tracks for a number of labels such as Toolroom, King Street Sounds and Kevin Sanderson’s KMS Records. She produced several tracks, including the single 'Everywhere you go', topping the charts of Shazam, iTunes and aired worldwide on BBC Radio, Pandora, etc.