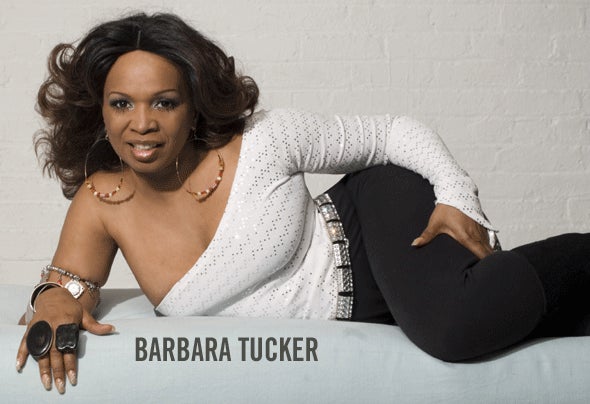 She is a Writer, Club Promoter and Entertainer Extraordinaire! "Once during the lifespan of a musical style comes an extraordinary artist that captures the era. In Dance Music that is Barbara Tucker -- entertainer, writer, choreographer, dancer, and singer." The world-renowned, leading diva of dance music is much more than just a vocalist -- she lives to bring the spirit of love from the stage to the floor. Strong in her belief of the power of the stage, she performs from her pulpit, singing the message of everyday people, everyday love. Once Barbara has blessed the stage, you are guaranteed to be touched, to feel joy, and to move to her inspirational message. The advanced technology that has been added to her live shows allows Barbara to go with the spirit of her audience, never giving the same show twice with nothing short of real. While others memorize every ad-lib, Barbara loves adding new sounds that create excitement to the show, riding on the feeling of the night. As the co-founder of The Underground Network, the longest running club night in New York City's history, Barbara has been a strong force in the New York scene for years. All her hard work networking has also brought the house scene closer together around the world. She consistently promotes the Underground Network by organizing tours and booking/producing up-and-coming artists -- from Tokyo and Sydney to Chicago and London. As a solo artist she has traveled the world over and over again from Russia to Sweden an as far as Africa. Shes done the Berlin Dance Award &MTV Parties all over. Barbara has toured with and/or recorded background vocals for Moby, Cerrone, Pet Shop Boys, Dave Steward, Deee-lite, Wyclef Jean, George Clinton and Reel to Reel. She has also choreographed and/or danced with Shannon, C&C Music Factory, Jay Williams, Sabel, BWP, Johnny O, Jovann, Butch Quick, Soul System, and Too Nice. Barbara is also the creator of the B-Crew project that featured herself, Mone, Dajae and Ultra Nate for which she wrote the hit song "Party Feelin". She has worked with numerous artists including Byron Stingily, Duane Harden, Inaya Day, George Morel, Mijan, DJ Paul Trouble Anderson, Pierre Salandy and the Pasta Boys. Barbara has worked with or is currently working with the industry's top producers including Tommy Musto, Little Louie Vega (Dance Classics such as "Beautiful People/Deep Inside", "Stay Together "and "I Get Lifted"), Lil Louis, Danny Tenaglia, M&S - London (Soulful songs such as "Keep on loving you" and "Bring You Love"), Mood II Swing, Albert Cabrera (Formerly Latin Rascals), Eric Morillo ("Jazz it Up" and "Party Feelin"), Full Force, DJ Pierre ("Everybody Dance"), Whiplash and Turner ("Stop Playing with My Mind"), David Guetta Give me Something and Preaching. Currently Barbara is working on a couple of projects, and in the studio working on her album for B-Star Records and producing other artist as well as a new track with her group the B-Crew which features Dawn Tallman, and Charlotte Small, with music produced by Stacy Kidd. With the success of Most Precious Love people are still being moved from the U.K. to Miami and Portugal, and in between Barbara receives awards and accolades for her accomplished works and performances. She is Founder and Organizer of And Let the singers be heard, where she showcases 15 house artist established and new, turning it into a conference within the conference. The newest project is with Timmy Vega (of Soul Central) Duty Funk We can do. She is the only recording artist with a summer residency in IBIZA SPAIN that she has been doing for the past 6 years where she host a weekly party thats banging and receives much International praises and recognition. This creative force will be touring with her new album project, "LOVE VIBRATION" so get her quickly. Watch out for new collaborations from some of your favorite producers, such as Blaze,Frankie Esteves &George Mena, DJ Spen and many more. Her new company, Consulting Muse is a consulting company for artist, up and company as well as established. As she inspires from the stage, now she inspires behind the stage. Staging and mentoring artist in the art of performance as, SPIRIT IN MOTION. This Legend, this Activist, this Universal Diva, this Woman sets the standard for a true performer. This is Barbara Tucker, and when a new club opens, they call on Barbara Tucker because she knows how to Set it off and get the party started.Right!!