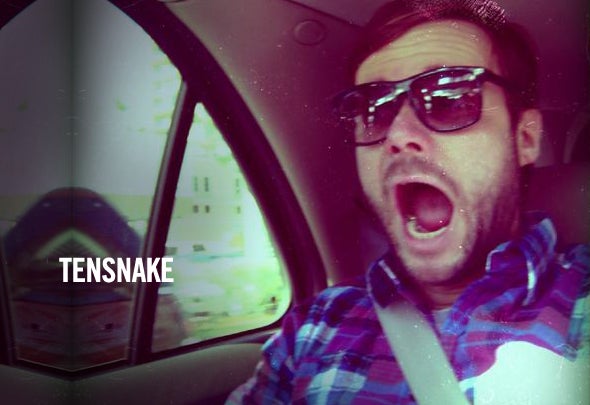 You know how sometimes an artist comes along and you just know that youre in for the time of your life? Thats what happens when you hear a truly great Tensnake record – and right now there are already a dozen of them spinning out there in the disco hemisphere. Remember the first time you heard the dreamy, (new) romantic synths of „Congolal or the impossibly yearning „In The End (I Want You To Cry)? Or the feeling you felt in your feet when the supernatural melody from „Coma Cat first drifted into earshot? This is the musical alchemy that drives electronic producer Marco Niemerski. And it has to be said, its pretty damn potent.Born in Hamburg in 1975 and raised on a diet of disco, soul, boogie and funk, Niemerski started out listening intently to the radio and recording shows on tape with 80s pop stars like Simple Minds and Duran Duran. “I grew up in the suburbs where there was nothing to do except listen to music so the radio was the most exciting thing around me. But my older brother was into D*Train, Shalamar, Aura and other boogie stuff. I was maybe ten – there it is again! But later I listened to everything.” Like most musicians and devotees of dance music, Marco had a couple of club experiences which connected him to the heart of the rave machine. “In 1992, there was a gay club called Front where Stockhausen was a resident DJ. I was totally shocked by something so new – one track I remember being into was Ce Ce Rogers – „No Love Lost.Boris Dlugosch was the resident too and when he played, he was double-tracking and I wanted to do that too! After that experience, I spent all my pocket money buying records – from 1992-1998 I bought every house record that came into our local shop.”But where did the music come from? Well, it was while working at a music promotion company called Public Propaganda - who coincidentally promoted pretty much every big dance record in Germany – that Marco started producing initially.He bought a Yamaha SY85 and a Roland Juno 106 and was just 24 at the time. It was the first step but ever the perfectionist, Marco made music as a mere hobby for several summer seasons.“Six years ago, I started the Mirau label with two friends. The first record „Around The House was a part of The Restless EP, the third Mirau release. “I did it in one night and it felt like a lucky strike,” he grins. “But in 2006 , I was surrounded by the minimal sound and it was so boring. I was inspired by Metro Area who included tiny disco sounds and combined that with house music – thats what kept drawing me back.But how does the Tensnake sound evolve until its truly venomous?“Sometimes I play around and find a melody or I am inspired by something I heard on a podcast. Dance music is all about sampling – but I always reply, my music is sample-free. Im recreating... and Im proud of my ability.” As for „Coma Cat - its already been a serious international hit around the world. Says Marco: “Its crossed over into so many worlds and it gives you a good feeling.” Indeed, the track and the wide-ranging mix compilation „In The House were an instant success for Defected and Marco himself.Its now 2011 and thoughts have now turned to the imminent Tensnake Live + limited edition (which will feature brand new, exclusive re-edits & the new single, live favourite 'Something About You' on Mirau) and the long-awaited Tensnake debut album, which is now in the very early stages on recording. As a live act, you can expect to see Tensnake at Glastonbury, Garden Festival and Lovebox alike and if youre heading to Ibiza, you can catch Tensnake live at Space for We Love, where he has four shows this season. After that, hell continue to traverse the globe with upcoming shows in Australia and North America alike. “Im so happy with the massive year Ive just had,” he smiles. “Im in a good place. But Im looking forward to the balance of shows and proper studio time in 2011. The plan is to work on new material and have my album finished by the end of the year.” Watch this space.http://www.tensnake.com http://www.facebook.com/tensnake http://www.lastfm.de/music/Tensnake http://www.discogs.com/artist/Tensnake http://soundcloud.com/tensnake http://twitter.com/tensnake