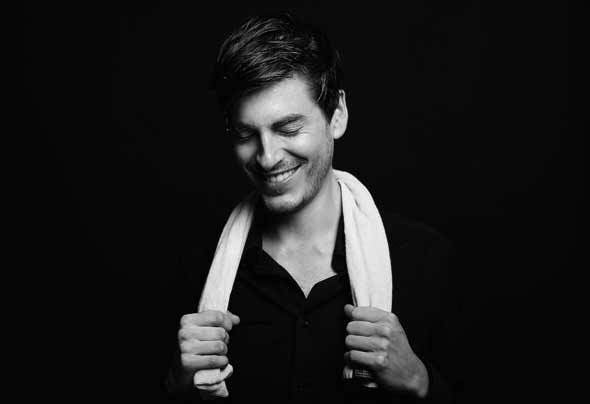 Cartoon life - At six years old, CORD LABUHN had his first real career aspiration : becoming an ‘inventor’. Or space traveller. At least working in some kind of laboratory. Hence he became a producer of beats, tunes, records, imagery & merch - and toured the whole planet to play music for the most spaced out... Earlier, when the ghost of Jimi Hendrix jumped out of his parents record collection and passionately promoted the guitar as the weapon of choice for a leftist punk, folk, if not eurodance infected teenager of the 90s, the piano and his sister’s drumset would have to step back for a while. A few years later when TV was still the thing and gaming consoles like PS1 were battling N64, Cord the Beatmaker was rather staring at tiny AKAI S2000, MPC and CRT displays, head-nodding, turning the jogwheels, dreaming of a second turntable to complete his DJ setup - the true school, golden age hiphop way. Next mission - still as a school kid - was a self-released vinyl record with international distribution through a self-founded label – learning everything from scratch, only a few years before DJing went 99,9% digital, crazy fast and globalised anyway. Arriving in Berlin and founding the mashup label „BROKEN BOOTLEGS“ (with Exploited’s Shir Khan and Andy Szankay) was good sparring for more delinquent ventures in professional sampling culture. Musical diversion had found an anarchic playground, genre-bending seemed to be a welcome concept for a radical open mind. To date, his longest running project is ROBOSONIC, which was originally formed as a DJ-producer duo together with Sacha Robotti more than 10 years ago. Over the course of time it became Cords solo moniker in the dance music game, since his former partner had emigrated to the US for a fresh personal start. A while after the unconventional, free-spirited debut album „Sturm und Drang“ (2007) Robosonic took the world by storm with a string of popular tunes and remixes that went into the crates of tens of thousands of DJs worldwide and made it to top spots in the infamous Beatport charts (“Worst Love”, “The Edge” 2012, “La Fique” 2013, “House Music” 2015, “Rise” 2016). With releases on labels like Defected, Toolroom, Get Physical, Diynamic, Stil vor Talent, Deep Dish’s Yoshitoshi, Nervous, Crew Love, Kittball or Mother Recordings, ROBOSONIC became an authentic figurehead for something dubbed “Golden Era House” (Juice Magazine). Not only because Cord was convincing real rap icons like Masta Ace, Jeru the Damaja and KRS-One to collaborate on house tracks, but also because ROBOSONIC remixed true legends like Todd Terry, Arthur Baker, Kerri Chandler and Eddie Amador. The house & techno driven sets and records under the R°° flag are internationally recognised and performances in 45+ countries (and counting) reflect the universal appeal of a trademark sound Robosonic unleashed into the world. North & South America, most European countries, South East Asia, China and Russia, Egypt down to South Africa, Dubai to Australia, Lebanon and Israel. Cord Labuhn has seen and pleased hundreds of stages, clubs and crowds over the last years. And with the string of new Robosonic releases through Defected, Kittball, Mother Recordings and more it becomes clear that he won’t stop shedding club sweat and tears. Somewhere along that way Cord has succeeded not only in making marks in the history of Berlin’s musical identity but also in commercial and academic fields of his own design: His Humboldt University thesis on the digital future of DJing and its cultural conflicts, was published in 2009 with support from the Goethe Institute and Fink Verlag. From research and Academia to entrepreneurial inspiration, Cord’s practical but stylish invention – the “Punchi” towelscarf – has become not only a trademark for connecting creative endeavors with “real life matters” in physical form, but also for his creation of hybrids – bringing together the best of both worlds. Add commissioned works in the field of fashion (Kaviar Gauche 2010, Raf Simons 2011, Wunderkind 2014, Isabell de Hillerin 2013-15) and you may empathise as to why Cord the human doesn’t seem to spend much of his time on social media, even in the century of the selfie. In 2017 Cord Labuhn has redefined his structures and launched a series called OUTTAKES. The label and collaborative hub serves primarily as a studio-to-listeners feed – to pilot an own musical direction, independent from A&R decisions, laws of the market – out of the box. A conscious counterpart and soulful antidote to the dance music business with its particular formulas. The zero point (#000) of the OUTTAKES series is the ‘SLEEP OUT’ mixtape - a carefully composed 3 hour set indulging in the tones and frequencies of sleep, representing this important human state in musical form – horizontal business. Two of his own productions bookend this mixtape: ‘Unter Deck’ was now released on the British label The Ambient Zone, the opener ’Gone Love’ (OUT 001) was released through Cords own structure as a wake-up call, followed by hypnotic beat science, hiphop infused electronica, songs, fragments, field recordings – and probably some dance music in the future – that would not fit under any other label than: OUTTAKES. Cords upcoming releases feature contributions from the likes of EPMD, The Beatnuts & Greg Nice, B-Real of Cypress Hill, founding fathers either of Detroit’s ‚Underground Resistance’ or 1960s visionary art collective ‚The Fool’ (Barry Finch) – in addition to his close friends and mad professors from the international house-techno circuit.  Cord’s artful hybrids and organic blends, zone effortlessly between subversive underground culture, the high-heel house and hippie hoppie heaven. Must be the constant creative struggle, the universal love and a cartoonish crack up behind all his work, which resonates. “That's all Folks!”