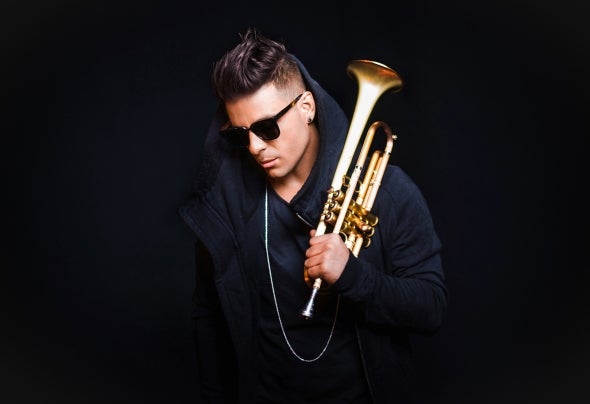 In less than a decade, Timmy Trumpet has successfully transgressed from the international stage as an acclaimed Jazz musician to the realm of global dance music. Now as a combined DJ/Instrumentalist, he’s ranked in the top 5 DJ’s in Australia (ITM Poll), performed at Ibiza’s Pacha and Miami’s WMC, and mixed both Ministry of Sound and Pacha CD’s featuring his own Aria Chart smash hit ‘Sassafras’. Rightfully dubbed “the busiest DJ in Australia” Timmy averages 7 flights a week, juggling over 200 shows per year, including all the major festivals and is a regular co-star on the FOX8 reality TV show ‘The Stafford Brothers’.No stranger to the limelight, Timmy won ‘Young Musician of the Year’ at age 13 before being granted a full scholarship by the Sydney Conservatorium of Music, where Sydney Symphony Orchestra’s Anthony Heinrich tutored him. Within two years he secured a position as the leading solo trumpet player in the Australian All-Star Stage Band, taking part in an extensive tour through Sweden, Switzerland, Germany, Denmark and Holland covering some of the world’s biggest Jazz Festivals including Montreux and the North Sea Jazz Festivals.After developing perfect pitch at a young age, Timmy’s progression into dance music has been propelled by his ability to effortlessly mix in-key, mastering the art of improvisation.“After discovering Jazz I began to jam over everything and anything, mainly stuff on the radio. It wasn’t long until I discovered house music, met a DJ, then played my first gig. I drove home that night knowing this is what I wanted to do for the rest of my life.”The Live DJ / Trumpeter cross-over experiment proved a great success, providing the launching pad for a career in dance music.After landing a contract with legendary house label HedKandi, he jumped on board the next flight to the UK, which lead to touring & performing to record crowds at South Korea’s Mass, Thailand’s Full Moon Party, and playing alongside Erick Morillo at Pacha Ibiza.Armed with a pocketful of contacts, Timmy was determined to create a name for himself in Australia...Enter his next big break- The Stafford Brothers- who heard of his talents while touring in Ibiza. “They introduced me to the Australian market outside of Sydney, and I’ve learnt so much from them about music, business and life,” Timmy says, attributing the brothers as good role models. Establishing a strong bond with the DJ duo he became their “brother from another mother” and their main supporting act while touring throughout the country. Timmy would soon find himself a co-star on ‘The Stafford Brothers’ FOX8 reality TV series. Timmy Trumpet’s rise to the top of the DJ world showed no signs of slowing down, with the dynamite instrumentalist securing himself main support act of Mo-town legend Stevie Wonder on his only Australian show in 2011. After a whopping 70,000 votes, he was ranked Australia’s #7 DJ (#2 in NSW) in the 2011 ITM Music Awards.FAST FORWARD TO THE NOW; Taking over mainstages across Australia with the king-size Future Music Festival National Tour, filming ‘The Stafford Brothers’ Season 3 in L.A, as well as mixing this years much anticipated and renowned ‘Ministry of Sound Sessions 10 CD’ featuring 1 of his own tracks, Timmy Trumpet is proving he is a force to be reckoned with.