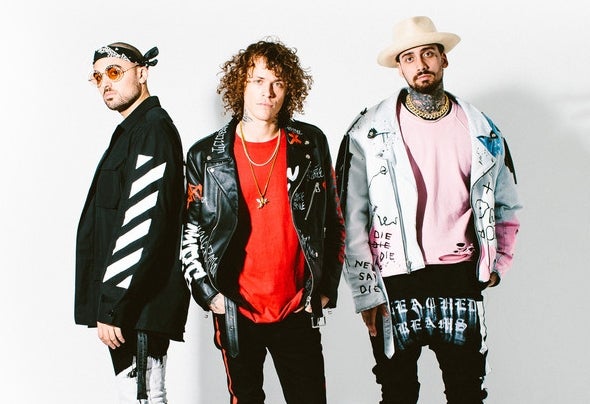 Euphoric and effervescent, Cheat Codes have it figured out. Perfectly blending pop and electronic music, the LA based 4x platinum three piece seem to know something that we don’t know - they’ve figured out the secret to life, or at least a way to jump right to the good part. Comprised of Trevor Dahl, Matthew Russell and Kevin Ford, the group have seen a meteoric rise since they first formed in LA two years ago. “Matt and I met like 5 years ago, and we lived together a few different times since then,” Trevor explains. “We never really made music together seriously. But when I moved to LA, Matt and Kevin started to write and we worked on a song together, and that’s when it all happened.” Releasing music independently, the group were an overnight success with their hits “Turn Me On,” and the tropical infused re-work of Salt N Pepa classic, “Sex”, that generated half a billion streams on Spotify. Since their first single with 300 Entertainment, “No Promises” ft. Demi Lovato, the group have gone on to cement themselves as one of the fastest growing pop and electronic acts. “No Promises” proved to be the song of Summer 2017 - peaking at #5 at POP Radio, the song has reached 4X Platinum status globally with over 600 million cumulative streams and has surpassed 1 million sales equivalents in North America. "No Promises" was nominated for a Teen Choice Award as well as iHeart Radio Award and Cheat Codes performed it with Demi on both The Tonight Show Starring Jimmy Fallon and Good Morning America. The group followed with “Feels Great” featuring 300 Entertainment labelmate, Fetty Wap. The inspirational anthem features Cheat Codes’ signature sugary electronic hooks paired with Fetty Wap as you’ve never heard him before. The song has 50M+ cumulative global streams, and has hit top 30 art pop radio and climbing. The group performed the song on Jimmy Kimmel Live! Cheat Codes have been commissioned for official remixes from acts like Katy Perry, Niall Horan, Rita Ora and, played major festivals like the Billboard Hot 100 and Firefly, and have been hand selected to tour with The Chainsmokers.