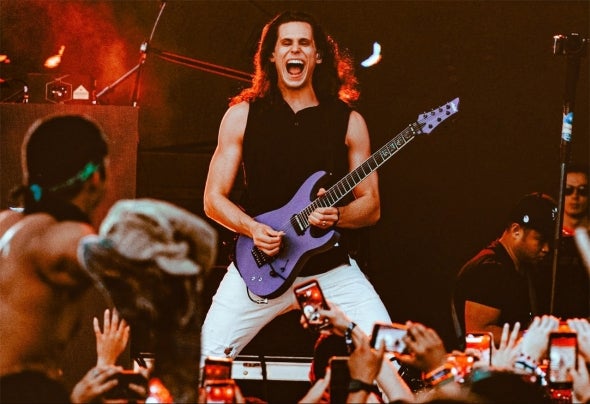 Sullivan King is an artist fast tracking his way into the limelight, spearheading the “metalstep” movement. The 25-year old guitarist, producer, vocalist, and songwriter has made his mark within the steadily growing bass music scene. His unique music production style of crossing metal & alternative guitar melodies with vocals and sophisticated sound design elements, has helped him stand out amongst many of his peers with support from prolific influencers such as The Chainsmokers, DJ Snake, Excision, Zeds Dead, and more. While he continues to gain stardom as an artist, his background is a reminder of what brought his music to this moment. The Sullivan King you know as a Metal and Bass music fusing producer and performer was molded by the influences from his favorite artists, legendary acts that dwell in the realm of the loudest bands and musicians in history like Nine Inch Nails, Metallica, Linkin Park, Avenged Sevenfold, and Volbeat. Coming off his first major North American headline tour in Winter 2019, Sullivan King has been one of the very few artists, in recent years, that has proven he can sell out historic theaters, dance-centric clubs, and everything in between. He’s become a festival icon for Bass music culture, setting a new standard for live performance in the EDM universe. His desire of carrying on the sonic legacy of so many influential Hard Rock acts becomes more and more apparent to the world as he wins over the hearts and screams of this new millennial era and generation.