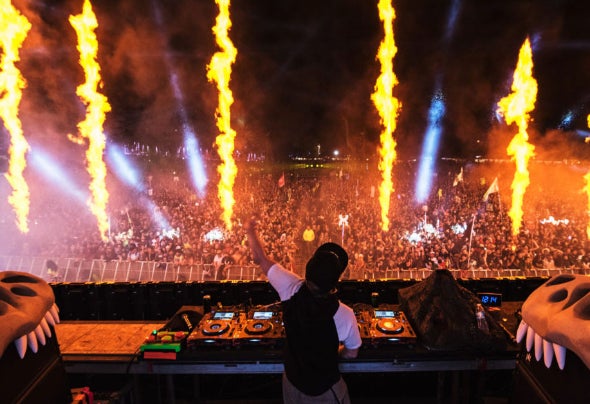 Imagine a world consumed by earth-shattering bass vibrations. An apocalypse of twisting and morphing sounds that melt minds and make bodies thrash. The spectacular audiovisual experience of an Excision show has the capacity to transport fans to another dimension where Headbangers rule the land. His current touring stage production The Evolution is his most captivating and impressive to date. Equipped with an absurd amount of lights, lasers, subwoofers and massive immersive visuals, it’s guaranteed to blow the minds of all in attendance. Hailing from Kelowna, British Columbia, Excision has spent his career dedicated to the Bass Music scene, leading and innovating in the creation of a massive, passionate Dubstep community. He is the creator of the prehistoric Lost Lands and the scenic Bass Canyon festivals, home to over 100,000 headbangers. He tours relentlessly and has headlined over 1000 shows and festivals across the globe. He has released 5 full length albums and countless EPs, singles and mixes amassing well over 2 billion lifetime streams. He has released hundreds of other artists’ music across his new record label Subsidia, following in the footsteps of the previous Rottun Records. Excision’s influence can be felt in every facet of the industry, and though he’s already established a legendary brand, he’s continually striving to help the community