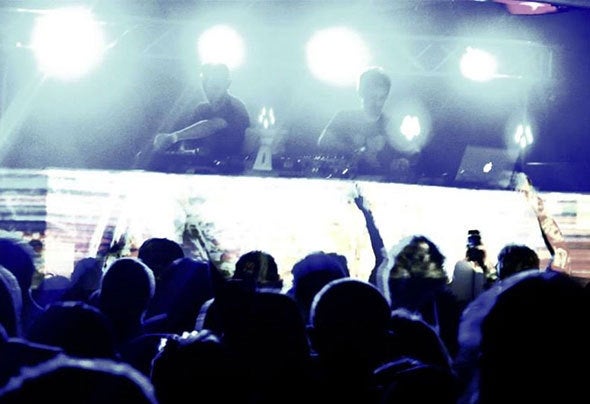 Ganja White Night is a live electronic 2-piece band, producing homemade and organic dubstep influenced music focused on a dialogue between bass and mighty melodic lines, since 2008.After composing different electronic styles like Hip Hop, Breaks and Drum&Bass, the two group members have been extremely influenced by a musical style in a fully emergence at the time : dubstep, music centre on "Bass Wobbling"while trying to stay away as much as possible from clichés that this style may impose.For their live performance the group decided to plan live arrangements allowing them to be creative and efficient combining machines, laptops, midi master keybords, all kinds of regulators, samplers, sequencers, processing effects and recently IPads.Yet the ground is bound to develop their skills as DJ's in order to diversify and be more flexible. Thanks to this the group is now more approachable for all types of scenes throughout the world.All two members are self-taught, and they've studied electro- acoustic with Annette Vande Gorne at Le Conservatoire Royal of Mons (Belgium). Learning about Musique Concrète and sound design completely shaped Ganja White Night's music in a totally unique way.Their first album; which digitally came out in february of 2010 is a compilation of all the LP's they had previously released, along with a couple exclusive new songs. They've self released everything they've ever recorder, label that goes under the name of Subcarbon Records. LeBelgeElectrod was in the band until he left in january 2012. T he album is featured in many online stores around the world such as iTunes (US, EUR, CAN, AU, UK, JAP), Amazon, Juno Download, Napster or Rhapsody; with the US being the country where it's been the most successful. The songs Peace By Fear and Blueberry are the best selling tracks.The band is also member of one of the biggest Belgian artist agency called "ThemApples", along side Aphrodite, Eptic, Dubba Jonny, Inspector Dubplate, Quest One Mc, Jenna G, Point Blank, Syndaesia, Total Science and many more...Their latest album called "Mystic Herbalist" has been released on january 2013. That album is the first one they did as a “duo”.And they’ve really try to make a special universe for the occasion. It’s the first album that they made on their new studio. They never took much pleasure in making music before. For Mystic Herbalist, they’ve tryed to go back to the source that give them the desire to produce Dubstep music. They also took lot of pleasure to work with Monsta for the design of the cover !  Artist Bio