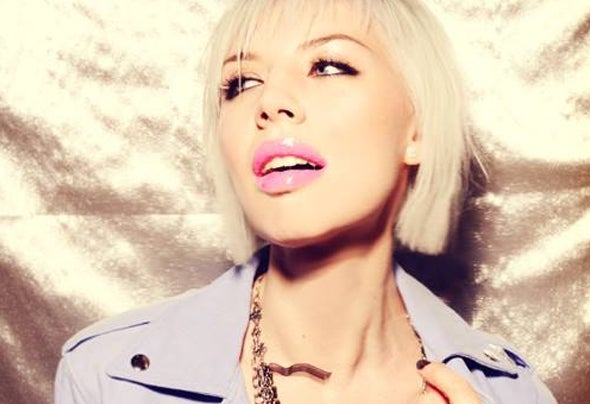 If you don’t know the name, you’ve heard the voice. Polina and her sultry tones are in demand, sought after by some of the hottest producers and DJs in the world.Polina has lent her silky, sensual voice to collaborations with EDM stars including Kaskade, Laidback Luke, Steve Aoki and Tiesto. The New York- based singer/songwriter has been the vocal heart for EDM smashes and club bangers, including Felix Cartal’s “Don’t Turn On The Lights,” which found heavy rotation on radio and MTV and brought down the house during a special live performance at Act II of Cosmic Opera in New York. She sets fire to the David Morales club anthem “Holiday,” and adds her distinct sound and flair to her newest release with mau5trap’s Moguai, “Invisible.”Summer 2012 was Polina’s biggest yet. She appeared at some of EDM’s biggest festivals, including Tomorrowland and Electric Zoo and was featured in the Rolling Stone and Billboard magazines. Her huge new collaboration with Steve Aoki, Tiesto and Kill The Noise is ready to be unleashed on clubs worldwide, as well as her new track with Laidback Luke and Angger Dimas.Polina is a skilled performer, and was handpicked by Steve Aoki to join him on his “Deadmeat” tour in 2012, along with hip-hop star Lil’ Jon and Wynter Gordon. On tour, she performed at venues such as New York’s Roseland Ballroom, and the main stage at Ultra Music Festival in Miami, in front of thousands of adoring fans all singing along with her. She opened for EDM legend Tiesto at New York’s Pacha and joined Deadmau5 onstage at the official WMC mau5trap party in Miami.Polina is, as Elektro Magazine called her, “the voice of EDM,” and she never stops working at her craft.Born in Moscow, Russia, Polina was musically inclined from an early age. Performing is in her blood, as she is the daughter of Russian pop singer Anka and grew up in a world of singing and performing. She trained in classical piano, and soon after began writing, producing and singing her own songs. During the electronic music boom in Europe in the 1990s, Polina found her true calling and has since combined her pop sensibilities with her passion for electronic and dance music. Besides her voice talent and high profile collaborations in the EDM world, Polina is also a songwriter signed to Ultra Music Publishing. Together with Sandy Vee and production team Stargate, she co-wrote platinum recording artist Sean Kingston’s 2011 smash single “Sleep All Day (Party All Night),” which peaked at number seven on the UK Pop Singles chart, number one on the UK R&B Singles chart, and has more than eight million views on YouTube. The song became a full-fledged sensation after it was featured on the soundtrack of The Inbetweeners Movie, the most successful comedy film in British history.Polina is hard at work on her own solo release, which draws inspiration both from her musical upbringing and from some of her favorite artists, like Annie Lennox. With her short hair and seductive voice, Polina resembles the striking Eurythmics star and strives to create the same kind of powerful, danceable music. With her haunting hooks and emotional lyrics, she is well on her way.