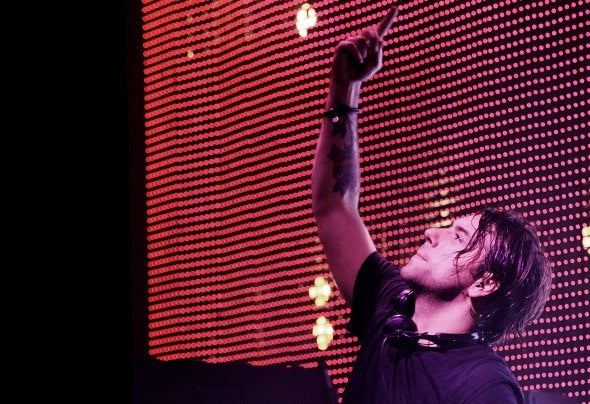 Sebastian Ingrosso is that rare thing in dance music: a musician who understands the world of melodies just as much as he understands the power of the kick drum, a producer who loves Gui Boratto and The Field but also dreams of working with r n b icons like Quincy Jones. And why not? Because 2009 already looks set to be even more momentous than 08 for Sebastian Ingrosso: although crucially he promises that the killer hooks and melodies are set to stun harder than ever this year. "I already do music and if it comes to pop, it comes to pop," he says. "What I mean is if it comes, it comes: I don't want to miss the melodies and the harmonies. When you go out, the song you always remember from the night is the simplest one." One of two key announcements for Ingrosso in 09 is his brand new slot at Sensation, where is the main resident, playing to 25 000 people per week in May and June alone. Consequently, Sebastian himself is super excited about the summer of 2009. "Musically, this year has been number one," he smiles. "The MGMT 'Kids' bootleg I did got cleared and it's been officially released on Refune. Plus we did a record with Pharrell Williams - it doesn't have a name yet, I'm not finished with it! - but it's going to be good and not what people expect. When the breakdown comes its still very N*E*R*D*! You know, it's the biggest thing for me in my career ever, I never thought I would be in the studio with them, those guys are great." Anyone who knows Ingrosso will tell you this collaboration is a dream come true. And if you're wondering why the song came out so well, again it's simple: having performed at the same series of festivals date in Australia in winter, the Mafia boys and the N*E*R*D*s bonded over a basketball game in Sydney. "It's true!" laughs Ingrosso. "We fought together against hooligans and then worked together!" Could you please clarify? "We had a fight - we were playing basketball together against another team and one of the guys on the opposition scrapped Chad so I knocked this guy out. And a slap turned into a friendship." Luckily, Chad and Pharrell taught him something a little deeper. "It was one day of work and of course you learn every day - but they reminded me that melodies are still number one." Sebastian has been behind many smashes in the past five or six seasons. Leave The World behind on Axtone, Umbrella on Data, Laktos on Refune, an amazing re-edit of Swimming Places from Julian Jabre on Defected, Royksopp and Hard Fi's 'Suburban Knights' and of course the searing remix of 'Jack You' with Steve Angello for Diddy and Felix which was approved by Sean Combs himself. But aside from the dark energy, there's another side to Seb. And if there's one song that sums up the sweet melodic soul of house music, it's Kings Of Tomorrow's 'Finally', sung by US gospel-soul vocalist Julia McKnight. "I've been working a lot with Dirty South," explains Ingrosso. "But me, Dirty South and David Guetta just did a record called ‘How Soon Is Now’ with Julia McKnight and that's probably the biggest record I've worked on. Julia McKnight sings directly from her heart. We all know that she sung 'Diamond Life' and 'Finally' - but this song is CRAZY. For me, this is one of the top 3 songs this summer." Also look out for another Seb collaboration with Kid Sister. "I worked on the first single from Kid Sister's album 'Right Hand High' which is a really good record - it's an honour to work with such an innovator." There's been one more seismic club shift this year. Since Sebastian's epic Mixmag Cream Terrace cover-mount last summer, the Swedish House Mafia have upped sticks to Pacha, where they will be holding down a weekly residency all season long. Are you excited, Seb? "OOOF! That's the biggest, the BIGGEST! I am so happy that I got this thing and that we have SHM at Pacha, that's the biggest. We have some really great guests - everyone from Funkagenda and Dizzee Rascal to Basement Jaxx and Bob Sinclar. It's a really cool line-up and that's hard when everyone has their own night. We've managed to come up with something weird but wonderful as a concept too: Dark Forest, come on in!" And what vibe can we expect to hear from Sebastian and the Swedes in their Dark Forest, we wonder? There now follows a mission Statement from Sebastian Ingrosso. "Dance music is growing and growing and it already took over America. Dance music is definitely taking over as an influence in hip hop and r 'n' b. Like I've been saying for a while now, trance and melodies are coming back and they're also combining. I think people are tired of big breakdowns and then it comes back to nothing... Everybody loves a great kick-drum and a killer bass-line but people also want to hear pianos stabs! Plus, vocals are definitely coming back! But not cheesy vocals - they have to be real." Melodies - and memories - are made of this. For more info check out: Myspace.com/sebastianingrosso Youtube.com/sebingrosso Twitter.com/TheRealIngrosso