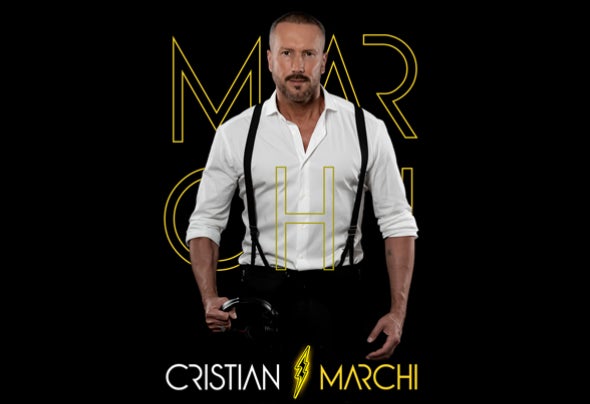 The long career of Cristian Marchi began about 20 years ago, in the clubs of his hometown, Mantova (one of the (C) COPYRIGHT CRISTIANMARCHI.COMmost beatiful cities of the north of Italy). Today, thanks to a long and slow rise, became the most requested dj into ita- lian clubs. And not only that: he plays regularly in France, Poland, Spain, Australia and in Mykonos too. He’ll be spinnin’ records at Paradise Club for the third summer.As if it weren’t enough, his tracks are played all around the world. “I Got You”, sang by Max C and produced with fellow dj’s Nari & Milani and his studio partner Paolo Sandrini, was worldwide licensed by Ultra, one of the main dance labels on the planet. But even now a lot of people are betting on a bigger success for the recent “Take Me To The Stars”, produced by the same creative team. Not to mention “Violence Rec ...a delicious record”, his brand new label. Cristian began this project that’s a natural evolution of his music in 2011 and wanted by his side Paolo Sandrini, a musician / producer he has been working with for years. The first release of the label is “Love Comes Rising”, a bomb produced with Gianluca Motta sang by JD Davis (the voice of “The World is Mine” by David Guetta and “Closer” by Chab). After a long wait, clubbers can finally dance to themost requested track during Cristian’s dj sets! Electro, progressive, house, trance, pop...adjectives and kinds of music do not count that much in his music. The sound of Cristian Marchi is melodic and full of rhythm, gives emotion and makes you raise your hands up in the sky. After a funny track as “Love, sex, American Express”, today the lyrics of his songs talk about love, a deep theme that usually is carefully avoided.Italian media usually focus their attention on international superstars (Italians love what comes from abroad), but people of entertainment and music industry know that Cristian Marchi is a real ‘phenomenon’. He regularly fills up the countless clubs he plays in, he’s a real mixer star... He loves communication too, not only music. His videos of youtube have more that 2 millions of views.One the few Cristian’s faults is that he’s a perfectionist. He follows all of his work from the beginning to the end. He knows that to give the best during a gig, a dj needs experience, training and the best instruments. Every show, every set has to be prepared carefully. Moreover, Cristian is quite far from the dj’s stereotype: at night he drinks only water and spends a lot of time in gym. Probably, Cristian relaxes only after a gig, when his fans take hundreds of pictures with him. He treats everyone of them kindly, because he doesn’t feel like a rockstar. The dj booths usually are much closer to the audience than stages. For a dj like Cristian is not so difficult to keep both feet on the ground. He only needs to do remember the long road he did till now.