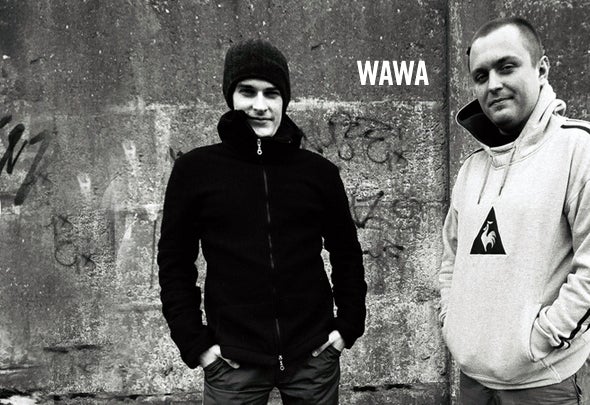 WAWA are Polish duo Vic and Bojan. As soon as house music arrived in Warsaw they knew they’d found their calling in life. Over the past six years WAWA have built a solid reputation as top notch DJs and producers. While on a record buying trip to Amsterdam in 2000 the boys left some of their work at the Rhythm Imports shop. Rhythm Imports loved it and invited them back to record more. The first release was “No Problem” on the Fresh Fruit label. Defected sub-label Fluential licensed the track and released it as the No Problem EP. That promptly broke into the British dance charts and was played out by the likes of Carl Cox, Pete Tong and Roger Sanchez. Fluential and Rhythm Import are still repressing it three years after its release. Next came the “GK” EP, also on Fluential, which features guitars by Gerald from Banda Sonora and drew airtime on BBC Radio 1. 2004 brought the release of “The After Party” with vocals by none other than Eddie Amador. Since then their reputation has been building at a rapid rate in the dance World with Brian Tappert (Soulfuric), Stonebridge, Warren Clarke, & ATFC all being avid supporters of WaWa. WAWA’s remix work has also brought success. Their mix of Gaston & Phillips’ track “Isolacion” was supported by Pete Tong on his Essential Selection, while their remix of Morris T’s “Let Me Be” hit number one in the DMC charts. Defected Records were so impressed with WAWA’s reworking of the club anthem “E Samba” by Junior Jack that they gave it a special release under the title “E WaWa” & went on to be a #1 selling dance record. Judge Jules (Radio One) was heavily supported their remix of Francesco Diaz & Young Rebels ‘Ibiza’, playing it no less than 6 times on his show! 2007 saw WAWA’s profile raised even further thanks to their excellent remix of Stonebridge’s ‘SOS’ (Apollo / Universal) which was championed by everyone from Steve Smart (Kiss) & Andi Durrant (Galaxy) and later went on to not only be a #1 club record in the UK, but the #1 club record of 2007 in the main Music Week club chart! Further club chart & dance radio success came soon after thanks to their remix for top American artist, JoJo (Mercury), (another top 3 club chart hit and a huge favourite with listeners of Radio One’s top ‘Floorfillers’ show), Hilary Duff’s ‘Stranger’, which was dropped peak-time at the opening party of the holy-grail of superclubs, Space in Ibiza and awarded ‘Tune of the Week’ in their weekly podcast! (“Stranger” went on to top the U.S. Billboard Club chart, as well as hit #2 in the UK club chart), and their remix of hot Positiva signing, Che’Nelle’s “I Fell In Love With A DJ” was another top 10 club chart smash. It was the boys remix of huge bassline smash, “Heartbroken” by T2, that alerted record labels the World over to the ways of WAWA though. Their rework was not only supported by all the biggest jocks but also played an unprecedented 7 times on Radio One’s “Floorfillers”, with the shows DJ’s commenting on air how much they loved them! As for 2008; even though the boys have been primarily concentrating on solo material, there was still time for the World’s #1 DJ, Armin Van Buuren to honor their new mix of Chicane’s “Spirit” as ‘Tune of the Week’ (as voted for by listeners) on his Kiss show, while their Cahill remix of “Trippin On You” made a massive impact in the sets of the World’s biggest players, going on to top the UK club charts. Two further club chart #1’s have followed, in the form of Rikki Lee’s ‘U Wanna Little Of This’ for Hed Kandi, and most recently Alphabeat’s ‘Boyfriend’, one of the hot bands to emerge out of 2008. WAWA’s mix is also being used for the ‘remix’ video that is being shown on all the major music channels, as well as receiving key spins on Radio 1 and other dance specialist shows! WAWA’s next big remix is for Loaded’s The Outsiders featuring Amanda Wilson’s superb ‘Keep This Fire Burning’, already tearing up floors on test press both in the UK & in Ibiza with support from the Freemasons, Stonebridge, K-Klass, and Cream resident, Gareth Wyn. It’s has also been #1 on X-pressbeats for over a month on pre-release!!! Autumn 2008 will see the release of ‘WAWA Traxx: Volume1’ on their brand new label, ‘WAWA Traxx’! Featuring three different productions in the form of ‘Time’ and ‘Sitar Track’, as well as the big-room vocal houser, ‘Forever’ featuring an amazing vocal from Rita Campbell, WAWA’s star will be shining brighter than ever as we go in to 2009!!