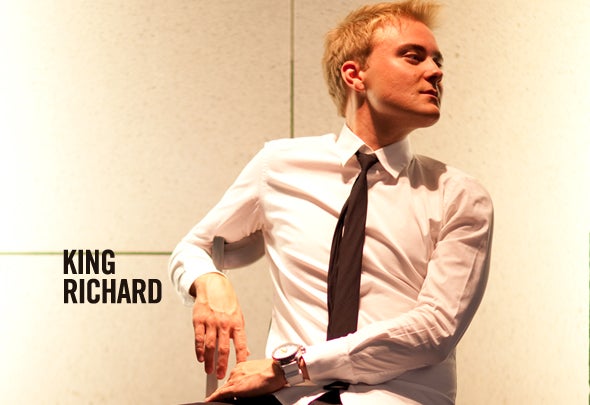 King Richard became Montreal's youngest and freshest talented DJ since he played around with a pair of turntables for the first time in September 2006. He soon landed residencies in Montreal's hottest night spots, taking both the Canadian and, subsequently, the International DJ scene by storm. Even thought his time on the DJ circuit has been of a short duration, his diverse and experienced background in both the theory and performance of music has very much contributed to his meteoric rise in the DJ world. He has a huge following in Montreal playing at prestigious venues such as Stereo, Time Supperclub, 1234, Medley, Parking, Circus Afterhours, Club Soda, Le Confessional, Balroom and at a plethora of private events. On the international circuit, Richard has recently played at Heaven ( London, U.K.), Platinum (Rabat, Morocco), at numerous locations in Lecce (Italy) and at private functions in Paris (France), and Krakow (Poland). He has played alongside the likes of Stonebridge, Denis the Menace, Mylo, Chris Montana, Tone Depth, Fred Everything and Sultan. Even high caliber artists such as NE-YO have invited King Richard to open for them. He recently returned from a highly successful tour of South America headlining at prestigious clubs in Sao Paulo, Rio de Janeiro and Buenos Aires. The clarinet player turned DJ comes from a family of musicians hailing from South Wales (U.K.) but was raised in Vancouver, British Columbia. Educated at the Langley School of Fine Arts and McGill University, Montreal, he was inspired to play guitar, bass, keyboards, piano and drums before becoming a top clarinet player performing with the Surrey Youth Orchestra, the Vancouver Summer Pop Youth Orchestra and winning gold at the Kiwanis International Fraser Valley Music Festival. Collaborating with his father, Richard arranged and produced three very successful albums featuring many genres of music including classical, jazz and pop and his vast knowledge and brilliant, natural creativity has enabled him to pursue music production by merging classical jazz with today's electronic revolution. September 2007 proved to be a pivotal point in Richard's career as he began hitting the studio to work on his own productions. At the 2008 Winter Music Conference in Miami, Pete Tong, Dean Coleman and Lee Cult were already sampling his rework of "Stuck in the Middle" by Steelers Wheels for thousands of house fans. His first Remix release "Speed of Life" for one of Germany's top producers Chris Montana, came out in November of 2008 on S2G Productions and within the first week it jumped to number 21 on the electro house charts on Beatport. This gave him the boost to pursue productions by remixing another hit on S2G Recordings with the support of Chris himself. The Collaboration "Wait for you" which was also released on S2G, ended up being signed to 7 compilation records. He is currently scheduled to release a string of his compositions on S2G, Groovebox Records, HiFi Stories, and the legendary Ultra Records revealing his unique and truly original sound.