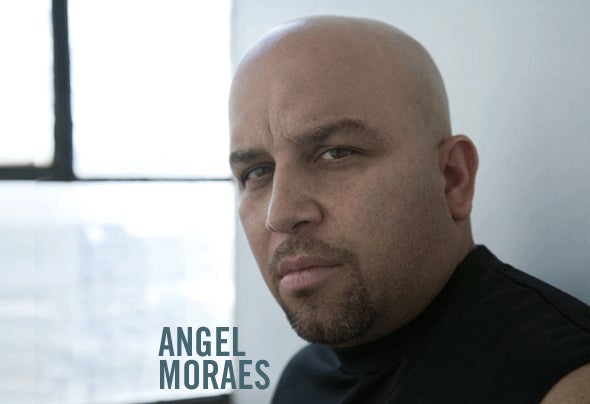 ANGEL MORAES BIO 2005 It was the summer of 1978, roller rinks were rockin', block parties were bumpin', and the sounds of disco ruled the New York airwaves. That was the year Brooklyn-born and raised DJ/Producer Angel Moraes discovered his life's passion in music. At just 9 years old he purchased his first record, Frankie Vallie's "Swearing to God", starting him on a path that would ultimately take him around the world. Angel came of age in the golden era of NYC's legendary disco and house scene. Always on the prowl for inspired sounds, in '82 he was a regular for the late night underground groove at Jellybean's Funhouse. However, it wasn't until a friend introduced him to the magic of the Paradise Garage that he discovered home. The Garage wasn't just another club for Angel, "it was everything, like living in a dream. When you have danced in a place that amazing - you start to set pretty high standards." The Garage sparked a fire in Angel that he carries 'till today. While spinning at a house party early in his career, a chance encounter with veteran producer Victor Simonelli turned into a studio session. Angel was a natural. In 1993 he sacrificed the security of his day job, traded in his beloved sports car and founded Hot n' Spycy Recordings. From his very first productions 'The Moraes Sound' was making waves. His creative approach to engineering and mastering, mixing up deep beats, dirty bass lines, industrial sounds, and stirring vocals established Angel as a highly respected and sought after Producer and Remixer - including projects for The Pet Shop boys, KD Lang, Jamie Myerson, Jocelyn Brown, Loleatta Holloway, and most recently Suzanne Palmer, and Dana Divine (please see Discog for complete list). In 1995 things really blew up. With the release of the now classic underground anthem "Welcome to the Factory", word rapidly began to spread, the tracks began to chart, and Angel's skills in the DJ booth came into heavy demand. An intensive touring schedule has made him a well-known name and a regular favorite throughout Europe, Asia, and the Americas. Yet, there was something missing ? a place to call home. Angel opted on Montreal, Canada to house his long-coming inspiration ? a custom analogue sound system that would rival all others. In 1998 after two years of painstaking planning, the Stereo afterhours club was born. It was a dream realized. Soon after opening, the custom designed installation became a Mecca for international dance-floor aficionados and talents alike, all seeking to take part in what has been described as a 'one-of-a-kind' experience. As Angel looks to the future, he continues to explore and expand upon his sonic achievements. Most recently, Angel completed a custom sound installation at Boston's new club, Underbar ? where he now holds down a monthly residency. 2004 marked a fresh beginning for Angel with the launch of Soundworks, his custom-built recording studio in Montreal (www.globalsoundworks.com). Angel's renewed creative energy in the studio has captured the attention of both industry heavyweights and music lovers alike. Angel's recent releases, such as the anthem You Should've Said (I Love You) feat. Dana Divine, on Roger Sanchez's Stealth Records (with 6 new remixes), the Shakedown remix for Victor Calderone's Statrax, the Suzanne Palmer, Luv2Luv remix for Star 69, and The Only One feat. Shawnee Taylor (Subliminal released on Tweek'd) have all been rocking dancefloors worldwide. Already, 2005 will see the release of five new original productions and four remixes, including: What I'm Saying, feat. Dana Divine on Redzonerouge, and Music is your life (keep on dancin') , feat. Dana Divine on Ronnie Ventura's new label Nuuf Records, and Sumantri feat. Plural, Tell Me on Tweek'd. So bust out those dancing shoes, and get ready to riiide the rhythm!