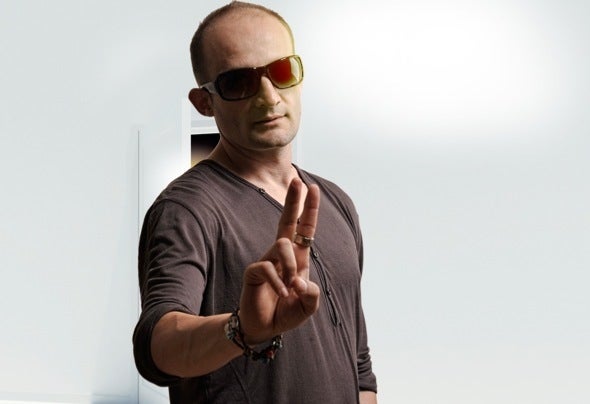 Pavel Delev a.k.a. Pacho B, Ellectrica or simply Pacho is one of the most critically acclaimed and eclectic music producers and DJ's in Eastern Europe. Having embraced his passion for music since the age of 15, Pacho took a substantial part in the development and popularizing of club culture in the Balkans. His greatest professional achievement started in 1993 when he began working as a producer and DJ for Radio TNN’s “Disco Show” program. In the following years he won a number of national music awards and in 1996 became Bulgaria’s number one DJ. This gave him the initial impulse and opportunity for entering the global music market: a year later he created the Ellectrica promo label (ht t p://www.ellect rica.com) t oget her wit h his colleagues Pepo and Erik. In t he years t o come they set up many outstanding concept parties and festivals all over Bulgaria, inviting local and foreign artists such as Josh Wink, Silicone Soul, Asad Rizvi, Richard Gray, T all Paul, Robbie Rivera.When Plovdiv – Pacho's homet own – became t he European Capital of Culture in 1999, he opened a shop for electronic music and professional audio equipment. That same year he started producing and hosting the weekly radio show “Club Time” on Katra FM. In 2005, after 6 years of success, he decided to invite DJ Max as a co-producer in the show. A few months later was the first broadcast of Pacho and Pepo’s new radio program called “Cool Sound” with iTunes podcast on the national Alpha Radio station. The collaboration between the two artists gave birth to the DJ duo Ellectrica. At the same time they started a professional DJ booking agency - E-booking (2001), http://www.e-bookingdj.com,, and the record label Ellect rica Recordings (2007), http://www.ellectricarecordings.com, with the release of the track “Underground Love”. Since then, Ellectrica has proven to be one of the most successful labels on the Balkans and the strongest house movement for young people. Aside from fostering appreciation for local artists, Pacho co- founded two new record companies focusing on the Eastern European market: Cloning Sound, established in 2009 (intelligent techno and deeptech vibes) and Stolen Soul Music in 2010 (recognized by deephouse and soulful sounds and aimed at vocal breeze and uplifting fans). Together with Pepo he has released over 10 singles, 35 tracks and remixes, as well as two compilations for Ellectrica Recordings and has worked with foreign labels such as Factomania Digital, Stereo Productions, Desertica Records, Nervine Records. Pacho & Pepo’s songs have been remixed and supported by renowned names as Carlo Lio, TigerSkin, Mikalogic, Sergio Fernandez, Boris Brejcha, Ismael Rivas; their music can be heard in the sessions of Mark Knight, Nic Fanciulli, Wally Lopez, Marco Carola, Chus & Ceballos.2010 and 2011 have been amazing and really successful for Pepo’s cooperative work with his colleague Pacho (Pacho & Pepo a.k.a. Ellectrica). Both t hey won in various cat egories at Bulgarian Nat ional DJ Awards (www.awards.bg) and in those two consecutive years they were named “Best Bulgarian DJ of The Year” (’10 & ‘11) and his label Stolen Soul Music – Best Bulgarian Label of the Year (’10 & ‘11). In the beginning of 2012 they have also stared a new radio show at the top radio station Ibiza Global Radio /www.ibizaglobalradio.com/, called Cloning Sound Radio Show with Pacho & Pepo /every Wednesday at 1a.m. – Ibiza Time/.Pacho is a resident DJ in most of the famous Bulgarian clubs like Mania (Sunny beach) and Chervilo (Plovdiv/Sofia). Since 2003 he has also been a special guest at the open-air party “SunSet Sundays” organized by Pure Promotions in Malta. Currently he performs in clubs all over the world: London, the Canary Islands, Ibiza, Miami, Moscow, Kavala, Istanbul, Prague.