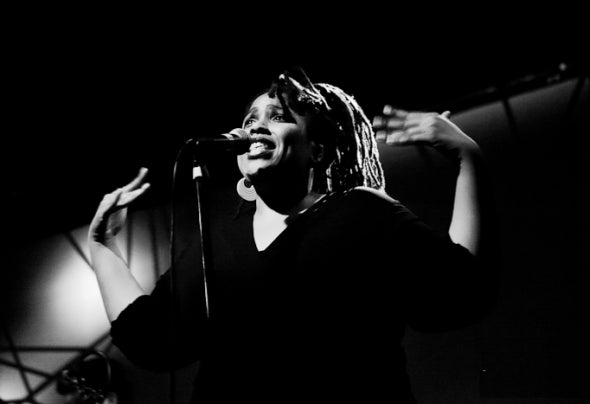 A staple of the Bay Area underground for over two decades, Rashida Clendening aka Audio Angel, continues to distinguish herself as one of the West Coast’s most relevant vocal talents, professing her oral acrobatics across an interdisciplinary of vocalized vocations. An iconoclastic singer/songwriter, prolific musician, and recording artist, she partitions her time across her unique combination of multi-genre mastery and award-winning voice acting. All while remaining the trusted announcer for many benchmark commercial clients. Emerging as a preeminent emcee of San Francisco’s Drum-n-Bass / Jungle explosion of the late-90s, Audio Angel worked with every major DnB collective to impact the Bay Area, from Eklektic, Compound Records, as well as Stamina DnB. In addition, she has performed and recorded alongside a wide variety of tastemakers, including the post-rock dance all-stars Sound Tribe Sector 9 (STS9), Ska ensemble Franco Nero, and her own electronic pop group Ex-Pyramids. Most recently, Audio Angel has worked on contemporary releases with Dirtybirds’ Worthy, GRAMMY Award-Winning Nigerian Artists Sikiru Adepoju & The Riddim Doctors, and San Francisco’s Sunday Scoundrels. An equally gifted voice actor, her award-winning work can be heard all over the world. From video games such as The League of Legends and The Walking Dead to becoming a go-to announcer for brands such as Proactiv, NorCal Honda, and McDonald’s. Always one to be of service to her musical community, this creative enigma has made a point to share her passion, holistic approaches, and careful considerations for the equity of others in every project, team, and ensemble she contributes to.