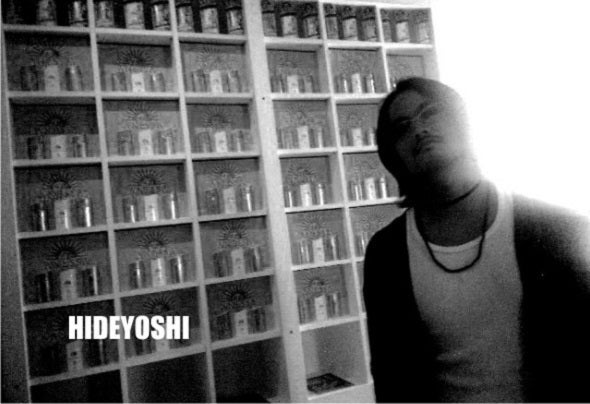 HIDEYOSHI was born in Tokyo.From the time of childhood, it went almost every day to the nightclub, music and an image were touched, and sensitivity was polished.It was an occurrence in Shibuya.Light pours into HIDEYOSHI's body that wakes up to expressing with an image, and it is begun by self-education to study an image.Neither sleep nor a meal was unenthusiastic ally taken just because it was devoted to image work.Such a sense and the talent gain popularity greatest support from Director TAKESHI KITANO.In a movie “Z atoichi”, it deals with a remix work, and at Venice International Film Festival, a work will be poured at the convention hall and it will play a role in the Golden Lion award which is the highest honor.In addition, he produced a lot of movie such as the famous artist of home and abroad, the fashion brand.He start "music activity" in January, 2012.Creativity which was trained as a movie director,sensitivity which was affected in street and club in back born,he shows the ability as producer.He released higher than 100 track from 30 labels of the world in only a half year as soon as he released first EP in April, 2012 and accomplished rapid growth to the artist who received Offer of the world tour.His EP is ranked the first place only in a chart of Beatport Top Selling Tracks in Japan of August, 2012,His album CD does the world circulation from Entropy Records of France Paris in September,furthermore, I stand and put up label "Killer Cross Over" of own and release experimental Track in sequence,The sound of the one and only brought about by the sensitivity that is cutting edge forged in a street of Tokyo and a deep spirituality,he receives big support from many big artists of the world as well as the country and gathers the support that is fanatic from audience of the world.The groove of the jet black of Hideyoshi which it is mysterious, and rises in night darkness,he will get a new legend in world club scene as well as Tokyo.Third eyes greatly opens by the meditation that Hideyoshi goes every day,Live Performance which sacrificed his unique sharp sensitivity not to depend on reason to let loose from there for and one's mind and body,I attract audience.Profile Image (590x404)In July, 2011, he works as open owner in EN-SOF T OKYO in Tokyo as a place of the self-expression.