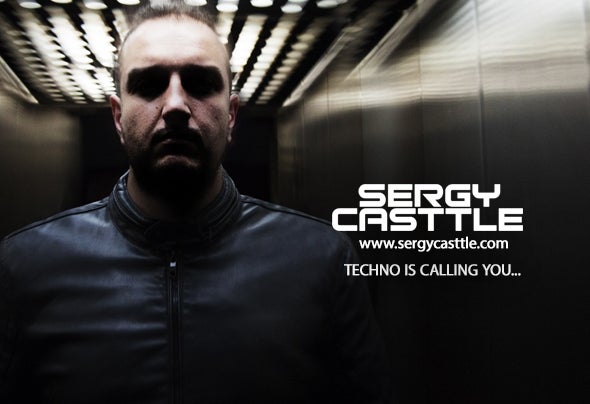 Winner of the DEEJAYMAGS 2008 - BEST DJ Revolution of Techno 2008. Sergy Casttle was born and raised in Madrid , Spain. At the age of 13 he would discover his true love to be electronic music, Influenced by on special artists of techno. Since 1999 his create has gone up with his talent both as deejay.In 2004 go to to take a course in electronic music production. Amazed by the local techno scene, he take the decision of create your label: XTILUXE REC. He has been through the best techno concert halls and festivals in the country during the period between 2000-2009 which set out as FABRIK, FLORIDA 135, CODE, Electrosonic Festival (2006, 2007, 2008), INDUSTRIAL COPERA, AIXA GALIANA, EMOTION, MACUMBA, SPACE OF SOUND , 113 Club, WOW, PENELOPE, MILLENNIUM, TECHNOSIS FESTIVAL, TECHNOLOVE, AMADIS, AQUA, FAMILY CLUB, SPECKA, ONE CLUB, COLISEUM, PARTY, ELEKTRO CLUB, CARPEDIEM, SOL49, ROOM, BREGOAIN, EROTIKA. SALA NAO, DUBAI,ETC ......Her performances leave their mark abroad in countries like EE.UU, England, Portugal, Germany, Italy,Holland, Belgium, Switzerland, Slovenia, etc...It has the strong support from two of the best deejays in the world and their issues are included in the World charts deejays such as Carl Cox, Cristian Varela, Ben Sims, DJ Murphy, Eric Sneo, Dylan drazer, etc .... every weekend playing Sergy Casttle productions, like thousands of deejays worldwide.It has a big repertoire of over 100 PRODUCTIONS in digital and vinyl format in : Teggno recs, Black codes, Application recs, Donkey head, Tmmr, Emphatic records ,Pornographic recordings, Xtiluxe rec, ,Rekktor music, Technocontrol records, Startech records, etc. ...........A very important new are the sets of techno and hard techno compounds EXCLUSIVE 100 to 100 of their productions: LIVE VINYL SETS. Sergy Casttle Forever Playing only YOUR tracks ¡¡¡¡¡¡¡¡¡¡¡¡¡¡¡ His sets in LOCA FM, MAXIMA FM, IBIZA GLOBAL RADIO , ETC... are common and acclaimed by the audience.In 2008 is recognized by Deejaymag magazine, nothing more and nothing less thannominated his first year with four nominations for the awards Deejaymags 2007 undoubtedly make it clear that Sergy is one of the figures in the future of electronic music national and global outreach, getting to be the number 12 national ranking,2nd producer and 2nd deejay in addition to the second position as best xtiluxerecords. In 2009 is nominated by the magazine back to dj deejay revelation,best track of 2008 by arpeggiator and best deejay of the year, reaping a success again tremendous to get the prize to:DEEJAY REVELATION 2009, 2nd BEST THEME OF THE YEAR - arpeggiator ( TOP GLOBAL OF CARL COX ) and 7th place nationally ranked.His compilations are included in prodcucciones the likes of Dance Valley 2008 mixed by CARL COX and Cream Ibiza mixed by SANDER VAN DOORN. It currently has 2 labels themselves and different collaborations among which labels as its own seal XTILUXE REC and TECHNORESISTANCE RECORDS. People love a exclusive sergy ́s sound in the club and festivals arround the world ¡¡¡¡¡¡¡¡¡¡ His live sets it’s a bomb ¡¡¡¡¡¡¡¡¡¡¡¡¡¡¡¡