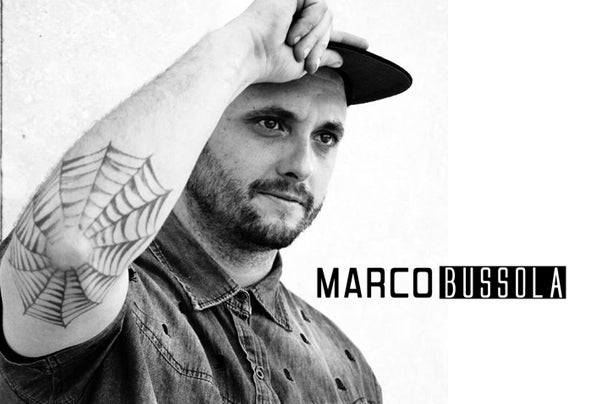 MARCO BUSSOLA (DAVID Sekera, Madrid - 1982) is one of the DJ's and producers with greater progression and projection in the current techno scene. This young Madrid began his love for electronic music in 2000, visiting the main rooms of the Spanish capital as SOMA, Yasta, COCOON, ONE ...In 2007 he left the forefront of Madrid atmosphere to enter a more underground, being frequent appearance in clubs and STONE, MAIN CLUB, on the outskirts of the city.Already in 2009, confirming her artistry, working with large communit ies of Dj 's as OLICSOUND ECLECTIC SOUND COLLECTIVE and participating in numerous events at different venues and rave, reaching the public peninsular center.'s Was when picked up his first residency as a DJ every Sunday was commissioned to make the closing session at the legendary session held in the hall last drink with their explosive sets of hard techno who kept the audience indifferent. His sessions have always been characterized by fast dynamic and forceful, making the bass drum and its closest allies.It was during t his period in which - t hanks t o his appearances at venues such as the legendary Bachat t a, VERSUS or int ernat ional event s like CODE in Fabrik Madrid - Marco pushed to immerse themselves in t he product ion.Sergy Casttle has clearly been the biggest influence in MARCO BUSSOLA artistic, putting a major boost to the career of the latter with its incorporation into collective DEEJAY WARS, as part of a team with members as charismatic as Casttle SERGY himself, LUIXMI, TONY MENDEZ , CRISTIAN MHULER ...MARCO BUSSOLA productions are endorsed by leading artists such as Dylan Drazen line among many. . Editing in major digital platforms like Beatport, Juno Records and is part of the team ITUNES Stamp as collaborators with DEEJAY AUDIO WARS WARS RECORDS, TECHNO RESISTANCE RECORDS, AUDIO GROOUND, XTILUXE RECODrS and TATTONIMAL RECORDS.MARCO BUSSOLA has confirmed his career as a DJ and producer not only as an act ive member of one of t he groups most respected DJs as DEEJAY WARS, but confirms his career with performances in events the likes of DAY ONE FESTIVAL MADRID, opening and closing this event in the years 2011 (aka MARCO BUSSOLA Sekera) and 2012 respectively on a major party atmosphere of sharing the stage with well- known PACO OSUNA, Richie Hawtin, Loco Dice, Luciano, Vitalic Oscar Mulero, Dave Clarke, Technasia, REEKO, MARCO CAROLA,His sets, always strong, tremendous reach vertiginous by joining these three dishes, leaving the audience just enough time to take a breath and keep dancing.