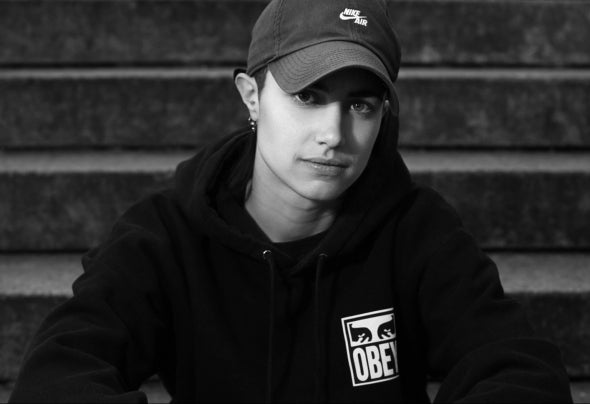 Kiar Oscuro was born in Switzerland, where she devoted the first 18 years of her life to sport -training with endless energy and devotion. She was introduced to the alluring world of techno for the first time at 19. This first experience changed the trajectory of her life significantly; leaving her with a strong desire to explore this whole culture. She discovered that it was more than a passion, she felt at home. After a few years, she decided to take the mandatory pilgrimage to the techno epicenter of Berlin. She thus found herself immersed in the diversity of the city and built her unique variety of electronic music based on her spontaneous way of life.  Since then, she has played in many clubs in Berlin such as KitKat, Sisyphos, About Blank, as well as some other clubs in Germany, Switzerland, Israel and Austria, and a couple festivals. She also released her first track « Rhea » with « advanced black records » and her first EP « Connundrum » with « Neuhain Recordings ».  The name « Kiar Oscuro » comes from the play between dark and light, the compatible contrasts of this world, the ability to see two sides of the same thing; the obscurity of the dark sounds of Techno reverberating through your bones yet bringing you a sentiment of well-being in the middle of an ecstatic atmosphere.  Her main goal is to bring people happiness and create an environment where everybody is free to be entirely themselves.