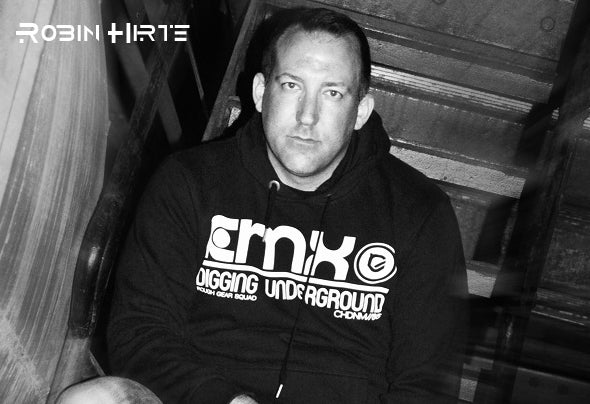 Robin Hirte was born on the 11th October 1972 in Stuttgart, Germany, as a son of an opera singer, into a very musical family. His brother is a very successfull guitar player, his sister is a vocal teacher.When Robin was 11 years old, he went to the disco of the youth club of his home town Vaihingen and when he heard the music, saw the dancefloor and the lights, he knew: THAT'S MY THING !Since that day he was a continuous guest at the youth club disco and three month later he was a member of their "disco group" and was every sixed week the DJ. At that time, his extraordinary music feeling were to be recognized. Robin was know as DJ “PATER ROB” on loads of events in the area of his hometown Vaihingen. With 15, Robin won a DJ-Contest from the dance scool Hague in Stuttgart and played every Saturday night as their resident DJ.With 16 he helped out another DJ, who was ill and played at the legendary ROXY in Stuttgart for one evening, (at that time they played every Thursday New Wave)The Main DJ of the ROXY heard him that night and said: Do you want to present every Saturday at the Roxy? (At that time ROXY was the most announced club in Stuttgart. Were he played mixed music, from Soul, Black, New Wave, Oldies, Neue Deutsche Welle...)From this day on, Robin played every weekend in all the big clubs in Stuttgart like OZ, BOA, Perkins Park, Musicland, Nachtwerk.In 1993 - it was the Summer of Trance - he found his Love for Techno and in the following years he had Residencies and Bookings in the biggest Clubs in Town: Skylab, Zenit, OZ, TOY, Ohm, Paris Club, Stomp, Nexus 6, Störung...He played 3 times at Love Parade Berlin, 4 x Street Parade Zürich, some Mayday-Afterhours and many more exclusive dates.In 1998 he began to work in the studio and had 4 releases, but these were made with other producers in their studios -Robin took his time and began to learn to produce his own style.After a 2 year break he came back in 2007 - no longer with turntables - just the notebook and his controller, that brings a revolutionary sound on the dance floors.Now he plays in clubs and festivals all over Europe and is planning tours in USA, Mexico , Brazil and Asia.In 2009 he founded his label “Das Ohr Digital” In 2010 he founded his label “Klingon Grooves”In 2011 he founded his label “Truth Tracks”Robins labels are supported and played by Ritchie Hawtin, Dubfire, Tomy Declerque, Umek, The Advent, Phunk Investigation, Len Faki, D-Nox&Beckers, Lissat&Voltaxx, Dr. Motte, Laurent Garnier, Paco Osuna, Ken Ishi, Tom Hades, Alex Di Stefano, Ahmed Sendil and many many more