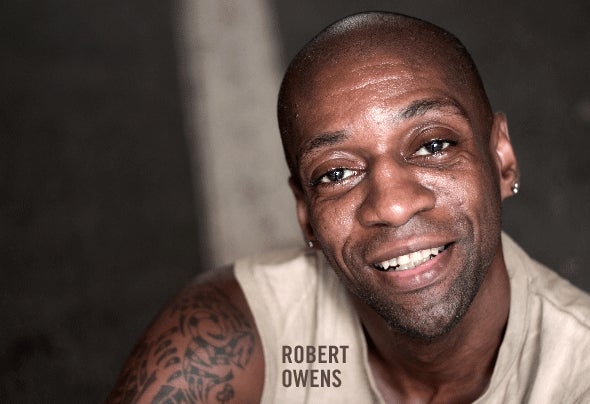 ‘If God could sing, he would sound like Robert Owens’ – ID Magazine. ‘The greatest male voice in dance music’ – Muzik Magazine ‘The voice of house music. Owens is a rare gift’ – Mixmag Such statements sum up this rare talent rather well; Robert Owens is a vocally gifted singer, songwriter, producer and DJ. Born in Ohio in 1961, Robert grew up singing in Church before rising out of Chicago’s developing house scene in the mid 80’s. He gained notoriety by singing on a number of underground club tracks and established a reputation as a man whose lyrics and emotional vocals breathed life and soul into house music. He was working as a DJ when he met pioneering Chicago producer Larry Heard in 1985. The pair formed Fingers Inc. with Ron Wilson and were signed to Jack Trax. ‘You're Mine’, ‘It's Over’, ‘Never No More Lonely’ and the 1988 full-length ‘Another Side’ followed, and showcased Robert’s beautiful church-honed vocals and heartfelt lyrical style. Robert has stayed true to his club roots pursuing two separate yet obviously connected paths. As an innovative and in-demand DJ, he has dazzled crowds across the UK, wider Europe, Japan and America. As a solo artist composing lyrics and singing on a series of tracks, Robert has similarly developed a strong following. ‘I’ll Be Your Friend’, ‘Visions’, ‘Gotta Work’ and ‘Rhythms In Me’, which Robert produced with David Morales, were just a few successful tracks Robert released in the early 1990s before largely bowing out of the music scene and running a Christian bookstore for several years. In 1996 though he burst back with ‘Ordinary People’, which was released on his own Musical Directions imprint and was the only independently released 12" to feature in Muzik magazine’s Top 10 tracks of 1996. In 1997 the re-released ‘I’ll Be Your Friend’ went into the UK National Charts at #25. Following the release and subsequent success of ‘Love Will Find Its Way’, Robert became the first artist to have two tracks in Record Mirror’s Cool Cuts Chart at the same time, at #1 and #8 respectively. Robert collaborated with Mr C in 1998 on ‘A Thing Called Love’ which reached #3 on the Cool Cuts Chart. The following year Robert performed as a vocalist and lyricist on Layo and Bushwacka’s highly acclaimed ‘Lowlife’ release. 2001 saw the release of Robert and Photek’s track ‘Mine to Give’, which received rave reviews from Billboard Magazine and was Muzik Magazine’s ‘Essential Single Of The Month’. The same year, Robert completed a rare remix for Ski Oakenfull. In 2002 ‘Never Enough’ was released on Essence Records and ‘Love Will Find Its Way (The Best Of)’ came out on Unisex. ‘Things That Make You Feel Good’ was also released on Amato International. More recently, Robert has completed collaborative projects with London Elektricity on their Hospital Records imprint and with Random House Project on Underwater Records. 2005 saw Robert team up with Quentin Harris on the beautiful ‘Always’; Robert also worked with Sandy Rivera on the club hit ‘Just Won’t Do’, released on Full Force Session. A collaboration with East River Rituals on ‘You Can’t Fight It’ rounded off an impressive year for Robert. Robert has assembled his own studio and has been concentrating on writing, producing and collaborating with musicians on material which reflects his desire to step outside the boundaries traditionally placed upon house music artists. In 2006 Robert will continue to embrace his club roots whilst reaching beyond the dancefloor.