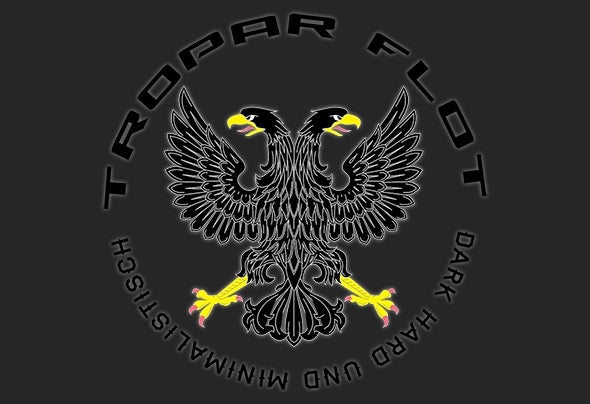 At the end 90th Tropar Flot (Vyacheslav Tropar) created a musical project Xatan, who has worked in the areas of IDM, Darkwave and Experimental, that was the starting point of his career. Played in clubs of Moscow, St.-Petersburg, Kaliningrad, Vienna, Berlin and Budapest.An important step in the development of creativity was the beginning of the 2000s, when Tropar Flot moved to Moscow and met with Russian master of minimal scene — Anton Kubikov (SCSI-9). This musician gave a big boost and opened new horizons. Interesting creative experience was the joint work with unique ethno-electronic project "Volga".In 2005, the project collapsed and Vyacheslav has stopped producing activity for many years...In 2015, he took the nickname Tropar Flot and resumed his work, but in the direction of Techno, DarkTechno, HardTechno, MinimalTechno.Vyacheslav:- "According to a nice DJ tradition there must be a text with high frequency adjectives: unique, conceptual, innovative, cult. In relation to the noun: the style, the taste, the sound and workmanship. Also not the superfluous would be to indicate that my professional career started before birth, and behind me the top collaboration and support from names out of a world rating.Some of my background can pull this "template" because electronic music I do from youth. But I've never had time to create portfolio in this area, and the projects were certainly deleted to start new one with a fresh eye. People who know me personally, consider this being a pathology. For me it is caused by another phenomenon – the desire to feel the same intense pleasure from my music as from music of my favorite authors. I imagine this creation in detail, but even the minimal difference of such image from the result make the last one mediocre."