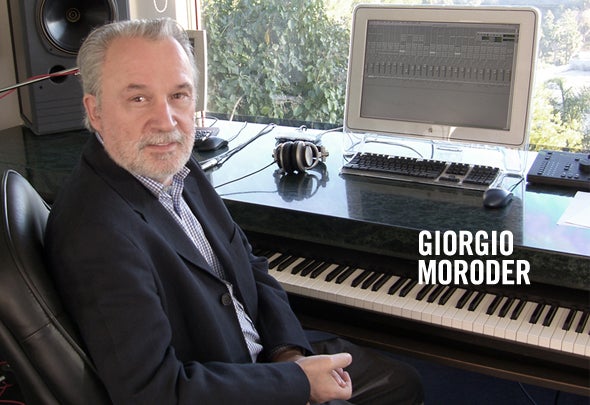 Giorgio Moroder (on record sleeves often only Giorgio) (born on April 26, 1940 in Urtijei (Ortisei), Italy) is a three-time Oscar-winning and three-time Grammy Award-winning Italian record producer, songwriter and performer. His work with synthesizers during the 1970s and 1980s had a significant influence on new wave, house, techno and electronic music in general. Particularly well known for his work with Donna Summer during the era of disco (including "I Feel Love" and Love to Love You Baby), Moroder is the founder of the former Musicland Studios in Munich, which was used as a recording studio for artists including Electric Light Orchestra, Led Zeppelin, Queen and Elton John. He also founded his own record label the Oasis Records which later became a subdivision of Casablanca Records. In addition to his work with Donna Summer, Moroder also produced a number of electronic disco hits for The Three Degrees, two albums for Sparks, and a score of songs for a variety of others including David Bowie, Irene Cara, Madleen Kane, Melissa Manchester, Blondie, Japan, and France Joli.