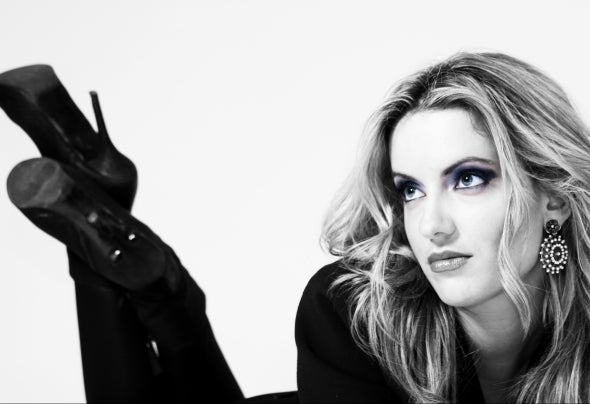 María Quiros, who is the daugher of the professor and poet José María Muiñoz Quirós,was born in Ávila on 12th December. She became a graduate after studying an English degree at Salamanca University. she defines her universitary period as a great period of maturity.She loved music, so she started singing when a child. when a lit t le girl,María didn ́t know what her favourite style was, so she started singing spanish pop and spanish musical styles. it was when she started studying English language when she discovered She loved black music and the most typical styles in english language.In 2005, she started composing her first songs in english language such as " look at me", " If you want" and "questions" among them . Then 2 years later she recorded her first singles without ambitious plans which were included on her myspace: www.myspace.com/mq08In 2008, she realised her favourite style was electronic music actually, for that reason she began working with different djs composing lines and melodies through their musical bases.Her initial musical works took place with djs such as The international dj Sergio Fernandez who she has worked on several tracks with: "in my mind" released by "hotfingers records" and " I feel high" released by Spinnin ́records." I feel high" became a killer track on the renewed Work imprint, Olav Basoski's own label and subdivision of Spinnin Records! Sergio Fernandez, the multifaceted Madrid based DJ and producer, serves up a quality piece of house music. And seasoned with the talented voice of spaniard Maria Quiros you can't go wrong. Full DJ support from David Guetta, Roger Sanchez, Carl Cox, Steve Smart (Kiss FM), Tocadisco, Thomas Gold and many others. " I feel high" was played by Roger Sánchez on his radio show number 47 known as " Release your self" "In my mind" and " I feel high" were and are played around the world on the most important radio stations such as Enjoy.fm, Sonic.f.m, beat 100.9, Loca f.m, Roger sanchez ́s radio show 488 from New yorlk... in addition I feel high was included in the famous disco ""MIami house WMC 2011" and " Big Room House Anthems" being involved with top producers and djs as Afrojack, Dmitry Ko, Stars on 45... In 2012 Maria is living new releases such as " come on to my world" with Bilber dj released by the recognised record label called " Ibiza sound Deluxe". She is also working with the top Polish dj called Mafia Mike, with the Italian producer called Angelo Positó. Now, t hey are working on new t racks which are expected to be as well accepted and wonderful as their previous compositions. About events María was hired to star the event " Café del mar Ibiza" located in Lisbon with the great dj and producer called Deep josh on 25t h june. . In addit ion Maria has part icipat ed in gigs in Spain at Music factory ( Salamanca) , private events and the current gig at BBC in Lisbon.