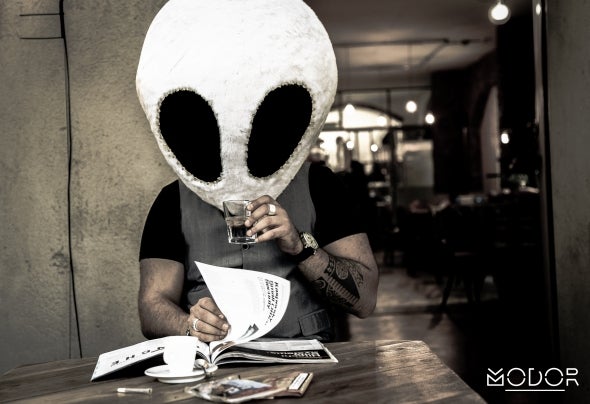 MODOR is a techno and electronic deep music producer based in Italy, supported by 6am Group (Los Angeles) and by Bass Crimes Entertainment (Toronto).The project, born in 2015, is based on an alien mask and on big live shows.MODOR has been started his way into the music with another alias since 2003 and during this time he has done different experiences as dj, producer and radio shows. MODOR worked in many different clubs in Italy and in other countries such as Greece and Spain, where he played music for private parties. Working hard on his Ableton software and on his Korg synth, he's keep on searching for the perfect sound, based on atmospheres, bridges, electronic melodies with plays of effects, distortions and cutoff and deep and sub bass lines and sometimes on dark vocals too. In a few time, working good on his style and on his social relationships and social networks, he arrived to be known at the other side of the world and his music is now released on Puchero Records (Costa Rica) owned by Macho Iberico and Mely Rodríguez. MODOR is receiving good appreciations from several dos and producers from different parts of the works such as Spain, Germany, USA, South America, India and Indonesia.www.modorofficial.com booking@modorofficial.com