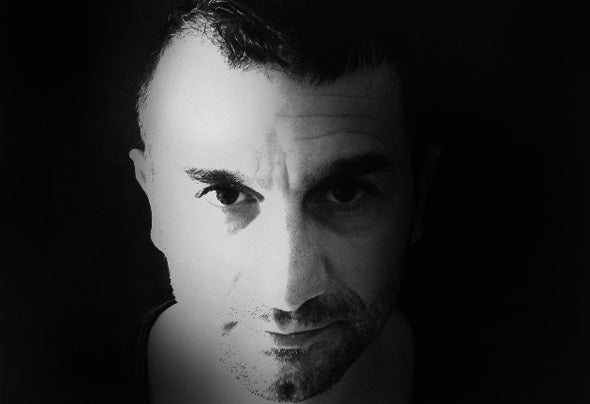 He live in Arezzo. He started to make music in 1989 with the analogue sequencers Roland mc 500 mk2 and Atari STE. He released the first track in 1993, it was called “Cronic Apocalipse” and in 1997 he created the nick name “Presslaboys” (of which he is the only author of all the 250 productions with this name).His sound followed a peculiar way, defined by the blending of his different experiences as DJ with electro 80', Acid House hits, old school beats, progressive & first house music, (The Cure, Depeche mode, Kraftwerk) Italian house style.All of this, of course, It’s happened into those musical expressions that characterised all last decade: dance, dub, trip hop and electronics music in general. In addition to his passion for music, he cared also about everything around it: minimal design and graphic art, always looking forward. From 2004 to 20012 he made important releases for the famous Labels: Crosstownrebels, SAW Recordings, Baroque Records, Viva Music, Harthouse, Yellow Tail, Armada Music, Monique Speciale, Casual Lab and remixes with important artists of the electronic scene. He played into the more big festivals all around the world and the best clubs, touching down a lot of countries: Brasil, Japan, Russian, France, Spain, Ukraine, UK..etc....His Style is recognized by the most illustrious Djs of the world. He always used to compose music with a massive electronic component, also when the electro wasn’t so famous, that’s why a lot of old releases still sound right and quite proper for the actual music buisness. (He Never have been too much minimal but always consistent in their roots...questo è un pò una cafonata in inglese lo toglierei). With Presslaboys he brought down the music ground important signals and sounds, and then he tried to mix them with more varieties of vocal expressions and styles.After 2008, Luigi Gori organized some big events with Melodika Association.Presslaboys are back with new productions. In the 2011 April came out an interesting remix of 19 Box Recordings by our friend Hiro, big talent of Japanese scene, and in the 2011 June they have released a new version of “Innocent” in two different versions with the Magnificent voice of Lisa Shaw, Jeff Bennett’s remix of Reconz on Regular.(Luigi made other Remix and productions with Wind Horse Records, Indian new House-Deep House Label, Progrezo Rec., Pild Records and many more.At the beginning of 2012 he left the name Presslaboys to produce just with his name Luigi Gori. Now he proposed a new tracks of house music and deep style. His next release will be release on Casual Lab, Monique, Low to High, Tulipa rec., One to One. He actually just terminated a new electro-rock record as producer and arranger with the songwriter Andrea Ferrante for the Raindogs project, that will be out in 2013 January.