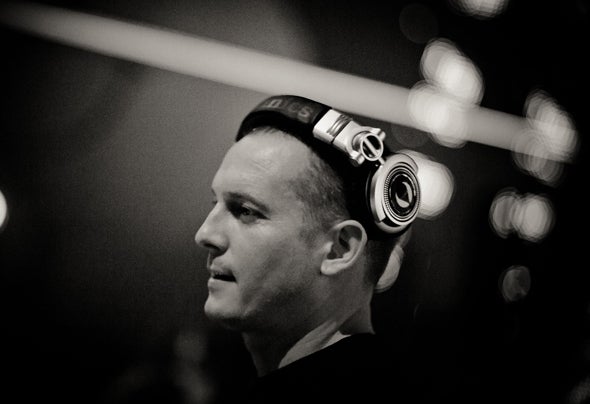 Remy Unger has been one of the driving forces behind the electronic music scene in the Netherlands. With bookings on all continents under his belt, Remy left his mark on the worldwide scene. Recent years have been treating Remy well with high profile gigs like Timewarp NL, A Day At The Park, closing sets at Awakenings and of course his wildly popular residency at the ‘Click’ club nights and festival. His latest venture the ́Fone Audio ́ record label, in collaboration with Patch Park, is taking him back to his roots releasing a unique mix of pumping energetic techno and tech- house. Let ́s explore the background of one of Holland ́s finest and yet most modest artists.The Roxy Remy’s adventures started in ’89 with his first visits to the legendary Roxy in Amsterdam where resident Dimitri brought a new sound to a new generation: house. “It was love at first sight” Remy remembers. “The energy that was released was so intense that I had to be a part of it!”The First steps Unger bought turntables and during the next year spent all his money on records, sometimes even forgetting he also needed to feed himself every once in a while. The hard work paid off and by 1990 Remy found himself behind the decks at the Roxy. International bookings started piling up and soon he was playing Twilo in New York, John Digweed’s Bedrock Nights and Ibiza’s finest clubs. “I learnt a lot in those days” Remy reminisces, “I was thrown in at the deep, going straight from being a clubber to being a DJ in the most respected clubs. It couldn’t have been more intense”.The next level It was a time when house was synonymous with hedonism and new peaks were reached every week. “Sometimes the crowd went so berserk, you couldn’t hear your own mix!” Unger laughs. After two years, an overflowing schedule caused young Remy to spread his wings and break loose from his residency at the Roxy. The next steps in his career took him to all the hot spots in Europe, Asia, North and South America. His straight forward no-bullshit approach to electronic music and good empathy with the dance floor have made him one of the silent forces in club land today.The Producer Remy has always been actively involved in all aspects of the record industry as a label boss, producer, remixer and compiler. His first successes as a producer came from collaborations with Sven van Hees on Wonka Records. Sven and Remy then went on to found the widely respected Global Cuts bringing forward classics such as ‘Piano Power’. His work with Roland Klinkenberg also resulted in some classic material like, ‘Ignite’, ‘Mexico Can Wait’, ‘Till Ya Drop’ and their remix of Eye Wall – Bad deal on his own labels Taste and 68 Recordings. Big solo tracks on these labels included ‘Backstabber’, ‘Mano’ and Serious Damage under his own name and many hits under his alias Wavecatcher. Many of these tracks were licensed by EMI who got artists like Nathan Fake, James Holden, Jark Prongo and Mike Monday on the remix. In 2003 Remy released his album ‘Bang!’ which brought forth his hit records Dustsucker, Scrambled and of course the title track Bang! which all made it on to many compilations. All eyes are on Remy now with releases on Fone and Gem coming up!!