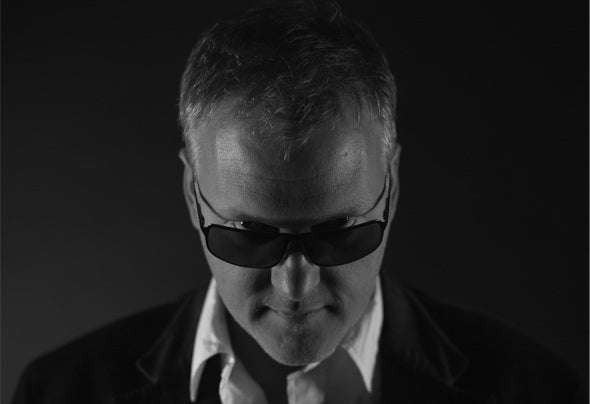 Frank De Wulf was always into music with a strong, original sound & rhythm no matter the genre: from new wave, dance, electro European and American experimental post-punk with Kraftwerk and Art of Noise as two of his major influences or dare he say “muses”. One of his first releases as musician/producer was the 12-inch Acid Rock track with his alter ego band Rhythm Device on Music Man Records. The track became a big hit, and is now seen as a bit of a classic, or so he’s told. His work as a DJ gave him the idea to make a record just for DJ’s. He wanted to create a kind of tool for mixing tracks while still keeping the familiar theme going. He started to work on several tracks but due to a lack of time never really got to finish them. Still eager to release them though, he decided to call them The B-Sides. The record went through the roof and he ended up releasing 4 volumes (on Music Man Records) plus remixes of them. Due to the success of the B-sides, Frank was asked to give live performances as well as do DJ sets all over the world. It was a remarkable period, he met up with other performers and DJ’s, who where all starting their musical careers, people like Joey Beltram, Moby, Derrick May, Sven Väth. He decided to start up his own record label which gave him more creative freedom to release his tracks and do production work for other artists; like remixes for all kinds of artists in and outside the new beat scene like The Shamen & Erasure but also The Orb, Jam & Spoon, Orbital, Biosphere,… At the end of the nineties Frank decided to concentrate on another great love of his: the world of film and post-production. But somewhere in the back of his mind, he always knew that the time would come when he could no longer ignore this need to make music, this need to create and let the magic flow again. So now the 5th volume of the B-sides, a series of 6 brand new tracks from Frank De Wulf, is mastered, released and currently available on all digital portals. The new tracks are followed by the ‘old volumes’ which are being released for the first time ever on digital download sites. All Frank’s output will, from now on, be released on The B-Sides label. The label is to be distinguished from the B-Sides series. The series have their own specific sound and intention towards the dance-floor. The label will also be open to other projects and musical directions. It can be seen as a personal label that explores Frank De Wulfs favorite music and the way he makes music himself.