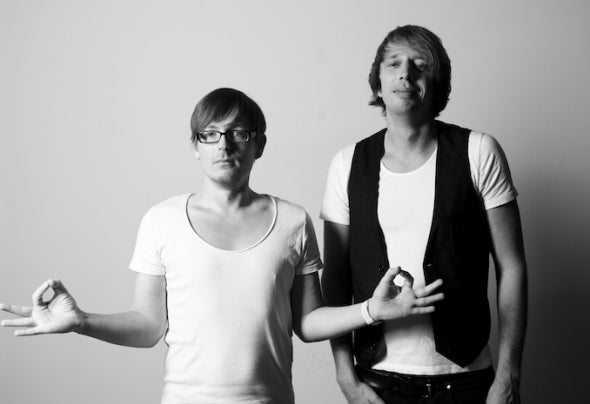 Let us introduce the Berlin-based live-act duo CHANNEL X: It was in 2005 that mutual friends first introduced André and Mirko to each other. Soon after, the two enthusiasts decided to start producing music together and thus formed CHANNELX. Their musical history however, goes much further back.As André Quasar,André has been a regular DJ since 1996, playing a mixture of deep house and minimal techno in clubs like the renowned Casino. A DJ first and foremost, he only started to produce in 2003. Mirko, on the other hand, has been experimenting with the production of electronic music since 1996. He is a producer at heart, a precise technician redefining his set of possibilities with every technical advancement, while staying respectful to his musical roots, which range from Hip-Hop, Jazz and Electronica to deeper and harder techno sounds like those of Alexander Kowalski. “I saw Alexander Kowalski play live at the Tresor once. That was a magical moment. I decided then and there that I wanted to play live”, Mirko explains. Their different approaches to the planet of techno are a genuine source of inspiration for both of them. “We both inspire each other in different areas”, the duo explains. Mirko started to DJ through André and André has focused more on his production skills thanks to Mirko’s motivation. But differences apart, it is far more important what brings the two together: Producing bouncy music that fluctuates between their different influences, from Mirko’s deeper lounge sounds to André’s minimalistic house approach.This unique combination resultant in a powerful mixture of clicks, effects and pumping grooves is at the heart of the boys’ energy-laden live sets. Equipped with a machine park consisting of two laptops, a sampler, midi controllers and effects units, CHANNEL X have been rocking clubs around Germany, showing off their perfect technical know-how, stage wisdom and ability to adapt to the mood of the crowd. This isn’t just another one-man laptop show! Far from it, André and Mirko only play their own productions, rearranging and editing them on the go and thus broadening their portfolio whilst in the DJ booth. “When you DJ, you know how people will react to certain tracks. But when we play live, almost nobody knows our tracks. So we work even harder on organizing our live act in such a way that you cannot stand still. You simply have to move,” André elaborates. “The first time we saw people go crazy to our own music, it was a massive rush and it became an addiction. There’s no stopping us now,” Mirko adds.After many live shows around Berlin, 2007 saw the release of their first EP on the minimal label Kassette Records. Hailed by ravers and charted by DJs like Pan-Pot, Jeremy P. Caulfield or Afrilounge, the busy DJ Oliver Koletzki – amazed by CHANNEL X’s energy and skills – signed them for a release on his ever-growing label Stil vor Talent. The Bug in Coffee EP was a massive success for both label and CHANNEL X, receiving great press and airtime by big names like Laurent Garnier, Jesse Rose, Karotte or Jamie Jones.Since then, many important releases followed on Stil vor Talent such as the two successful X-Files EPs or, more recently, the tech house hits ‘Little Symphony’ and ‘Steamboat Willie’, while a new album is set to be released in October 2012. The two boys, however, show the most passion for their live gigs.And what better way to express that love than to present it to a wide audience. “We want to rock as many parties as possible. That’s always our main goal”. Whether it’s on the festival stages throughout Europe or clubs in Australia, it’s hard to avoid CHANNEL X if you’re enthusiastic about electronic music.