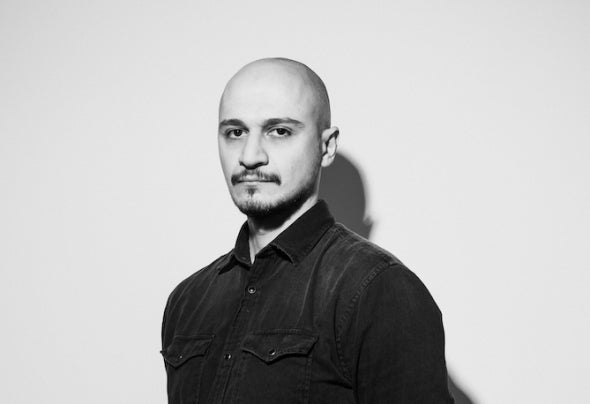 Born in USSR and being Greek raised, Stef Mendesidis spent his youth in Thessaloniki where he got fasci- nated by the early-days techno sound at local raves. This determined his future path. In his early 20s Stef moved to Moscow where in 2012 started playing in clubs. In 2013 he became a resident of the legendary Monasterio club which has just opened its doors to true techno fans in Moscow. Sharing the scene with the most notable techno artists, he mastered his techniques and eventually devel- oped his own recognizable sound. Nerd in grain, Stef sharpened his self-education by diving deep into the analogue essence of sound. Playing on 4 decks and using miscellaneous drum loops of his own production, Stef creates techno on the go, always leaving space for contextual improvisation. In sound production Stef Mendesidis uses a technique of one-take recording, staying loyal to the principle of live techno creation. He possesses a true synesthetic approach transforming his inner feelings, images and ideas into sound patterns. His music is released on such influential labels as Klockworks and Projekts. Nowadays Stef is shaking dancefloors of the most significant techno clubs, and his gigs are always a blast. His shows are a pure reflection of straight-forward outbreaks and never-ending dynamics that provide a gen- uine one-of-a-kind experience to passionate ravers. Known by his long-lasting closing sets, Stef can play up to 10 hours in a row and still preserve the maximum interest of a listener. His highly energetic sets are able to immediately make the dancefloor look like it’s midnight prime time.