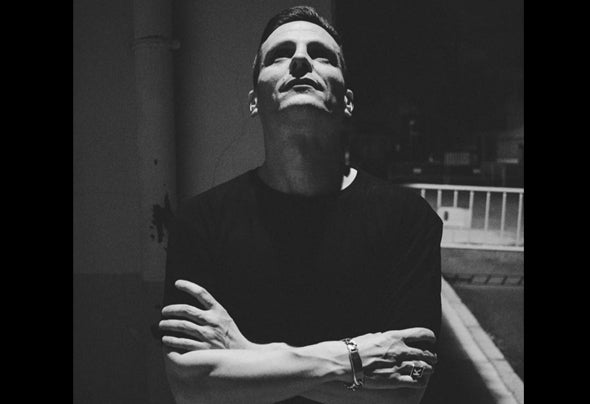 Born in Vitoria, Spain, Kike Pravda’s interest for music comes since he was a child. His parents worked in a music store, so he always had near as all kind of instruments as analog machines.Kike recognizes the influence from artists such as Basic Channel, Robert Hood, Joan Atkins, The Advent or Plastikman, and labels like Sinewave, Downwards, Axis, Counter Balance, Dynamic Tension or Tresor.This has led him to share stage with world-class artists like Oscar Mulero, Ben Sims, Reeko, Exium, Jeff Mills, Dave Clarke, Regis, James Ruskin, Luke Slater, Takaaki Itoh or Surgeon, among many others. Given his passion for music, the next step in his career was clear. Kike soon started into production. His first work was on vinyl for Katak Dutch label in 2000, under the name Phazer in a duo with his brother. From then until 2007, many collaborations on labels like Labrynth, M_Rec, Injected Poison, Digital Reflection or especially Psychoskunk, with whom he worked closely on many references on vinyl and digital format.But it was not until 2009 when he saw one of his dreams fulfilled as a producer, published in the Warm Up Recordings label, which released “Fear is the Enemy”, which accompanied a work of Oscar Mulero remix.However, 2012 is the year when Kike Pravda gives the final step. First, with a new release on Warm Up, “Queen of the damned” composed of two tracks and, again, a remix by Oscar Mulero. And then, with the creation of his own label, Senoid Recordings, for whose first reference was supported with a remix by Ben Sims and which already has played by hand of reel known artists like Chris Liebing, DVS1, Truncate, Exium, Oscar Mulero, or Marcel Flenger.But both, Senoid Recordings as Kike don’t stop there, and have confirmed their next big collaborations for future releases.