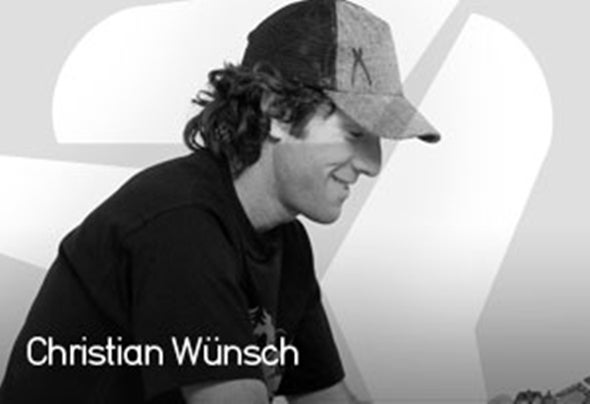 Christian Wunsch has been in contact with music ever since he was a young boy: thanks to the influence of his elder sisters he discovered the darkest pop of the eighties, as well as goth rock, punk and new wave.This influence was to stay with him for the years to come, when he moved t o Not t ingham. In Rock Cit y, one of the city’s most famous live music venues, he enjoyed many live performances by the bands that had meant so much to him: New Model Army, The Mission, Ramones, Joolz, Sisters of Mercy and so on.But it wasn’t until he returned to Spain in the early nineties that he came to be fully in contact with electronic music. Back in those days and thanks to Madrid’s nightlife and clubs like Attica, Christian experimented the curious fusion of all his previous dark rock influences with the most combative electronic music in the form of EBM.This had a huge impact on him and lead him to take a step in the right direction and become the star, rather than a mere spectator. In order to gain a qualification in sound, he moved back to the United Kingdom and it was there and then that he discovered the sound of Techno at its most basic stages.Whilst he studied, he started looking for second hand equipment and created his own home studio; first with a primitive Roland tr 505 rhythm composer and a Novation Basstation synth.Not long after that, he got hold of an old Atari 1040 computer, a relic that included two Midi ports; he also acquired a few more bits of equipment and started to produce music in a more serious way.Following a period getting to know the machines, he released for the first time under the name of Metal Artefakt with Rhythm of time, a label based in Madrid that was amongst the first ones in Spain to release techno records, back in 1997. That same year, his demo was selected for Sónar 97; his gig at the festival was his second ever live performance.The first work he released under his own name saw t he light t hanks t o SYL:Label, a label t hat belonged t o an important Birmingham distributor, Integrale Muzique, under de direction of Regis, a young Karl O’konnor. After he listened to Christian’s demo, he proposed to him that he should have his own label in the platform, and so he released several records with them.Back then, his distinctive energetic and cyclic techno already featured within his sound palette and included a subliminal Soul component that later on developed to become his trademark.Having released his records on other labels, early in the year 2000 he decided to create his own, Tsunami Records, which is still active nowadays. Soon after he also created Nine, and with time both labels have become a symbol for the purest and most militant t echno.Aside from what he has released with Tsunami and Nine, Wunsch has released over 50 records in labels from all around the globe, such as Theory, Sheep, Music Man or Audio Assault, just to name the most prominent .Aside from his releases, the onstage version of Christian is committed to live performances and to taking his personal view of techno to the best dance floors of the planet, whether clubs or festivals, in countries such as Germany, Hungary, Holland, Belgium, England, Czech Republic, Slovakia, Malta, France, Slovenia, Austria, Brazil, USA or Japan, amongst others.At present, he is a member of the PoleGroup platform, together with Oscar Mulero, Exium, Reeko and Architectural; in this respect, he has been releasing excellent pieces of work alongside his Selección Natural companions, as well as the fantastic False Flag EP, release number 8 of the group.After a period of calm and reorganisation, 2012 will see Christian getting back on the saddle in order to revitalise Tsunami, making a new release with PoleGroup and polishing up his live act so as to put sound systems from around the world to the test.Aside from operating on his own, he’s also an active part of the Work Out project, a new alternative within the techno live dj set concept. Brought to you by Christian Wunsch and Oscar Mulero, both in terms of form and musical content, these sets combine the most up to date and futuristic sounds with the most classical influences of techno and electronic music in general. A choice two-hour musical revision in the shape of a dj set, featuring also a lot of unreleased material by both artists, as well as new versions of previously released tracks, which gives WorkOut! a personal and made to measure feel.Both the musical concept and the performance are designed to be flexible and modified to suit the needs of large events or clubs, or even the smallest of venues.