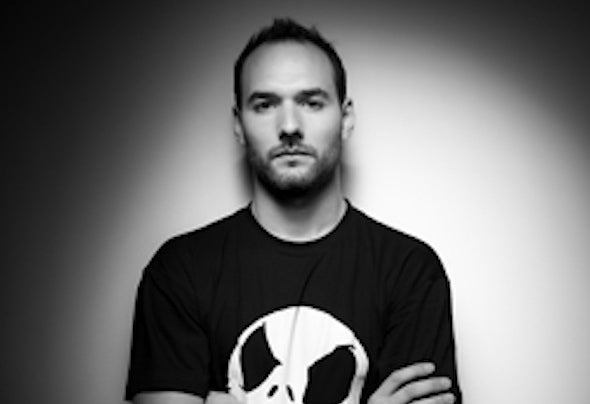 Jose Pouj’s career in the world of music began in 1999, when he started playing records in small clubs at the tender age of 15. T his took place in the region of Spain where he hails from, Castilla-León, and little by little his territory expanded.Following an unstoppable trajectory with its usual ups and downs, as well as the occasional dead periods owing to the cyclic crises of the electronic music industry, it was not until 2002 that he was signed up as resident deejay at a local club where the most innovative and industrial sounds of the time were being played. He was only eighteen.From then on, Jose Pouj got residencies at clubs such as Zeus (Medina del Campo) or the renowned Txitxarro (Bilbao), where he was joined in the DJ booth by artists of national stature like Pepo, Wavesound, Oscar Croma, Oscar Mulero, Reeko, Exium and many more.His sessions fluctuate between industrial/experimental techno and hard-tech, his reference being producers of the stature of Shed,Aphex Twin, The Black Dog,Autechre, Surgeon, Regis, Oscar Mulero, etc.Five years later, in 2007, he travelled to Madrid to take his first steps into music production. In the capital of Spain he lived one of the most important events of his career: after many efforts and hard work, he created his ownlabel, Injected Poison Records. In 2008 he started producing his own music.To this day Jose Pouj has released seven EPs in collaboration with artists such as Radial, Grovskopa, Exium, Christian Wünsch, Event7, Kike Pravda, Agony Forces, etc., until he was blessed with a chance to work with the great Oscar Mulero. Together they have recently recorded Injected Poison Records’ fourth release (Meta). Presently, records by Injected Poison are distributed to the whole world by the prestigious TripleVision Dutch record store.In January 2011 he made his debut in the famous label Tsunami Records (owned by Christian Wünsch), alongside Go Hiyama and Eric Krakeroy. T he track was called “Quietness”, an original number that soon was included in the charts of the best artists of the moment.The consolidation of Jose Pouj as a professional artist came after he released the EP Blood Poisoning with WarmUp (WU27EP). This record declared him as an artist who was slowly but surely gaining on great and acclaimed techno deejays and producers. It included three original tracks by Jose, under the tutelage of one of the most important techno labels in Spain.He is currently working on some releases that will soon see the light: Injected Poison Records’ next release (IPRD1003), which includes a remix of London producer Po, an old acquaintance of the label ever since he was published in its third release alongside Kike Pradva and Agony Forces. This is scheduled to appear in October or November 2011. Another of his current projects is an original track for GT- Muzike, together with District 909, Kazu Kimura and Tony Alvarez, owner of the label, which will come out around December 2011. As for 2012, he is preparing a remix for Delusions, the label owned by Archi Ferrero, as well as another remix for Labrynth Rec., which he will do in conjunction with Italian producer Kill Ref.And so the skyrocketing career of a young artist continues to unfold. Day after day he accumulates experience and the acknowledgement of the public, the media and renowned producers. He will, no doubt, set people talking!