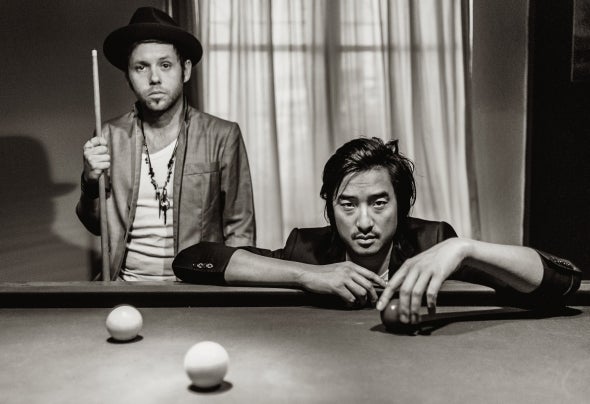 There were a string of tasty edits and the remixes for Keane, Moby and The Golden Filter. Endorsments from the likes of Erol Alkan and Aeroplane. A few festival slots and high profile club bookings. But still, when, sometime in back end of 2010, Villa started to tiptoe into their modest corner of the limelight, it was still a project into its growing pains. Originally rooted from the DJ partnership of Ghent duo Thang & Fredo, it wasn't until the former spend some time in the home studio of his long-time buddy Francois Demeyer that the definite shape of Villa is drawn up.Many moons ago, these boys rubbed shoulders in the short-lived local band Foxylane, but while Thang's well developing DJ ambitions took him elsewhere, Francois followed his own path - which lead to being part of the line up of Belgian's fashion darlings Vive La Fête, hooking up with The Glimmers for Disko Drunkards and crafting soulful poptunes with his own band Soapstarter.Now, the decades long club experience from T hang, matched with multi-instrumentalist Francois' well honed studio skills are a match made in disco heaven! Right?“Right!”, says Francois. “Disco is at the core of Villa, but we don't want to be confined by endless arpeggios and other cosmic trickery. There's so much more sounds out there, endless shades of disco to toy with.” His cohort agrees: “Everything we put out there must have a heart, an organic groove, a soul; anything to make it hit you where it matters. That comes first and foremost - we'll leave the labeling to the bloggers”. “Although we'd love to coin the phrase 'hyper- disco'!”, Francois jumps in laughingly.All jokery aside, the online community will be happy to know that the pair are currently working on there 2nd EP, but first they unleash a bundle of impressive remixes, beginning with their hyper charged rework of The Human League's 'Night People'.Also be sure to watch out for Villa's anthemic take on Adele's 'Rolling In The Deep', a rework of Yeasayer's 'I Remember' that sounds like it's born out of a cloud of grilled mushrooms (the good kind), and their Deep Space Nine-ish remodeling of Digitalism's 'Blitz'.It took a few years for these two buds to discover their creative compatibility, but as Villa they're off with a flying start. Keep your eye on the sky.