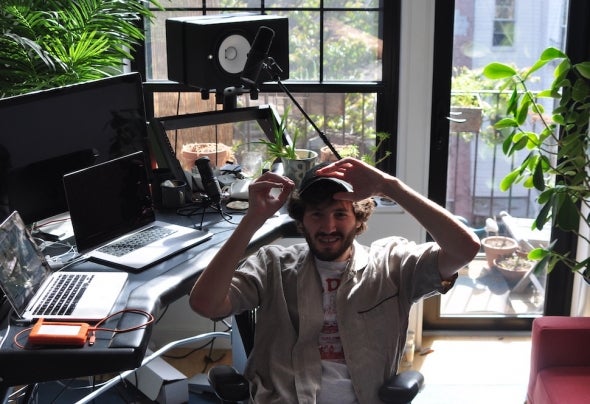 Brooklyn-based producer Baauer broke into the mainstream when his viral sensation "Harlem Shake" debuted atop the Billboard charts, changing chart rules forever. As of publication, Baauer holds the biggest single week streams of any artist. It is only Drake and Baauer who have topped 100,000,000 streams in a week. In the years following his hit Baauer headlined festivals, travelled the world recording with some of the biggest names in global pop and rap. An aspiring bedroom producer since age 13, Harry Rodrigues took the name Baauer to brand his tracks, which combined hip-hop, UK dance music, and clever samples from video-sharing sites. He debuted in early 2012 when his bass-heavy party track "Dum Dum" was released by LuckyMe on a laser-etched 12". The Mad Decent label then released "Harlem Shake". At first, the track made waves among tastemakers: appearing in mixes by Rustie & Jackmaster and awarded Pitchfork's "Best New Track"; but in early 2013 it exploded into the mainstream thanks to a meme where individuals uploaded amateur videos dancing to the song. "Harlem Shake" debuted at number one and earned Dance Song of the Year and EDM Song of the Year at the Billboard Awards. Baauer released the "ß" EP ft AlunaGeorge & Rae Sremmurd in 2014. And debut album "Aa" ft Future, Pusha T, M.I.A., Rustie, and Novelist in 2016 - with an award winning video by Hiro Murai (Atlanta). Since then Baauer has focused on standalone singles while recording his anticipated 2nd album. https://instagram.com/baauer https://www.twitch.tv/harrybaobao