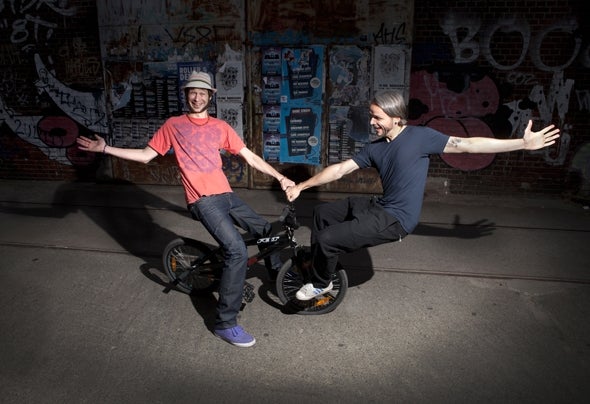 Timelessness and innovation – both poles can be unified in house music. For 10 years now Norman Weber and Marco Resmann have been living out their love for house together both at the turntables and in the studio as Luna City Express. Music and nightlife inspired both of them from early on. Norman often accompanied his father, a musician and DJ, on tour where absorbed a melting pot of party music, from Funk and Disco to HipHop and Acid Jazz. At 14 he heard his first Chicago House Mix on tape – a musical revelation and the beginning of his subsequent career. For Marco discovering electronic music happened in the early 90’s in a friend's basement studio where he first started delving into drum machines and synthesizers. What followed was a rapid journey through producing all the imaginable variations of electronic music as they occurred in Berlin in the 90’s. In 1999 Marco set up his Audiogain studio and established himself as a producer, producing as a solo artist under the pseudonym Phage and also in projects like Pan/Pot or Phage & Daniel Dreier, releasing on labels like Mobilee, Klang Elektronik and Highgrade. In 2007 he founded the label Upon You with Marcus Meinhardt and Hawks Grunert. At a millennium party in Italy Norman and Marco crossed paths for the first time and clicked immediately - two house nerds had found each other. When Norman moved from Jena to Berlin they began to play as a DJ team, organised own parties and produced their first tracks together, a mixture of Downbeat, TripHop and Deep House. In 2004 for the 10 year anniversary of the legendary Thuringian club Muna, Norman and Marco for the first time produced under the name Luna City Express - and till this day still feel closely connected to the club as well as Sonne Mond Sterne festival where they continue to perform year after year. One year later they released two very succesful EPs on Moon Harbour – “Fresh” (6th in Groove Charts) and “White Russian”. Both tracks became club hits, laying a blueprint for how classic and contemporary house could sound in the new millennium. Beside remixes and releasing on labels like Justified Cause and Enliven Music, Moon Harbour has truly become the home of Luna City Express, and at the same time they’ve played an essential part in developing the label’s sound. Together they mixed the second volume of the well-known “Moon Harbour Inhouse” compilation series, and release their debut artist album “Hello From Planet Earth” in autumn 2009. The album brings together 14 outstanding tracks – from techno to experimental, going from euphoric to quiet moments. It’s an eclectic album, not just for the club, and is all held together by the unique Luna City Express house vibe. And so it’s no surprise that every weekend they get to share that vibe to fans across Germany, Europe and the rest of the world. Text: Jens Wollweber www.lunacityexpress.com www.moonharbour.com www.moonharbour.com/booking