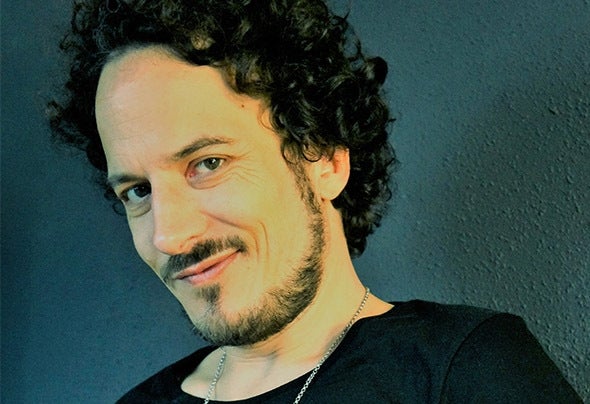 Pazkal was fascinated with music from a very young age, already when he was a little boy he sat on his bed, armed with a torch and his radio-tape-recorder, hidden under his blanket, and created his very own play list, recorded from the local radio station. The big talk before and after every song, performed by the radio DJ’s of these times as well as the unbearable breaks between each song were simply unacceptable for him. The way the DJ’s of these days presented their hit collections could not convince this young fellow. There must be more, thought the teenager and yes there was more; the world could not ignore what came across the ocean from the wild wild west. Hip-Hop and the movie “Wild Style” revolutionized the music scene around the world.Black DJ’s were working with black vinyl; they were scratching and spinning the turn tables forwards and backwards. Daddy’s eyes would have popped out if someone would have done that to his Elvis Presley records. For Pazkal it wasn’t a question of taste it was the question about the meaning of life. Grandmaster Flash became the enlightening grand master which he had to follow from then on.To retain the domestic peace, Pazkal’s parents had no other choice but buying the first set of turntables and mixer for their pupil. This was an adventure on its own as old Europe was not ready for the change in the music scene yet. It was nearly impossible to find shops for such equipment. Only after a long odyssey through Germany they made their way home to little Switzerland, with a trunk full of DJ equipmentThe first steps in mixing happened in the locked up room where he was polishing his skills, mixing and scratching 100 times the same tracks until his irritated father switched off the fuses. These fatal reactions lead to very unwanted breaks and for sure not to a peaceful get together afterwards.His very own bedroom was the place where it begun and where the grooving grew. It was where the real life happened and where his friends met and where the mixing, scratching and lifting off took place.In the very early 90’s something entirely new appeared on the music horizon, not just the music was the center, also the people, their cloths and costumes and of course the locations with the parties. This was the time when techno parties reached the heart of Europe. This kind of music went beyond everything existing, the whole night, nearly endless, one track mixed seamless into the next, and a crowd who could not get enough. From now on Pazkal bought house music records only, forget about the scratching rappers - DJ’s like Willow, mixing with up to four turntables at once, that was fascinating. He observed passionate and for quite some time how the House and Techno DJ’s were pumping into the sweating, screaming and dancing crowd. Pazkal went home and he knew that’s what he wants, he turned what he has seen into his own style. That’s how everything begun. While touring through record stores he met other DJ’s and was booked soon as resident DJ for the legendary House Café parties, a series of illegal underground parties in a basement of an industrial building. His sound was different and he found his talent to move the crowds, he learned very early being a DJ is not just about playing the music, it is entertainment, feeling the mood of the crowd and playing the right track at the right time.The next stages of his DJ career were bookings in the most prestigious clubs all over Switzerland. Kaufleuten, Sensor and OXA were the clubs which attracted party people from the entire country. But that was not enough, being a DJ is one thing but organizing events in the very own club was the next target. A dream came true and the ECHO Club in Basel opened its doors. With the club, the success was not to stop anymore and he was booked for all major events and played his sets alongside with the superstars and producers from UK and the States.Events like the Goliath, Streetparade, Sonic, Comet of House, Groove-Lift, Pump it up Live und Delirium. Countries like Germany, France, Spain, Turkey and UK were stations in his very busy DJ life.After some time, Basel as his home town became too small and he moved to Zurich where he started the label FreakBoutique. Zurich was ready for the freaky show of the DJ Duo Pazkal & Juiceppe, a mix of drag queen show, dance animation crew and irresistible sound. A blend of Minimal- Deep- and Tek was exactly what the scene was waiting for.Residencies in Zurichs most valuable Clubs Supermarket and Pfingstweide are the consequence. Regular appearances in Venues like Hive and Station are a next step.As a logic development Pazkal wanted to produce his own music. The first productions under FreakBoutique and Pazkal were released and distributed by Labels like RodeoAudio, Universal, GF Recordings und Colludo. His tracks were licensed on various compilations such as Kaufleuten Sellection, OXA- Minimal, Budenzauber, TechHouse Vol.3 and many more. With his new Solo-Singles and Remixes on MoodMusic, SaveRoom Recordings, Liebe*Detail, Miniload, PlasticCity and Colludo, he is back to the roots: House Music!