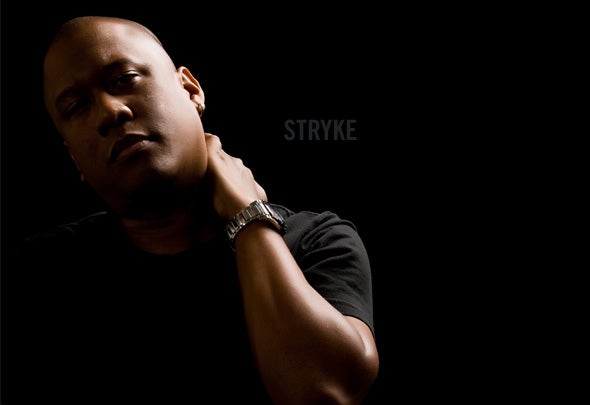 Born and raised in Kingston, Jamaica, Stryke began his music career at an early age. He started playing classical piano at the age of four. Moving to Miami, Florida (where he still resides) when he was ten, Stryke became heavily involved in early electronic alternative scene. His love for Beethoven and Chopin were quickly joined by his new love for groups such as Depeche Mode and New Order (not to mention an unhealthy addiction to video games, which he still has to this very day). Buying his first synthesizer at age 12, Stryke quickly learned the ways of additive synthesis and began writing electronic songs with his trusty monophonic Roland SH-101 synth. He soon discovered house and techno from a mix tape given to him by his cousin, a DJ in New York. He was hooked. At age 14, the young Stryke had already begun DJing to make money to buy more synth equipment. But after discovering this new underground dance music, he became as passionate about DJing as he was about making music. Says Stryke of the two, "Both production and DJing have really become one in the same for me. I really can't separate the two. The words musician, artist, and DJ, all have the same importance to me." Although his styles as a producer range anywhere from techno, house, to ambient, Stryke hates the barrier game. "I see it all as music. Every genre has music which is good and bad. That's it. I hate the fact that some people raise an eyebrow when I release a house record when perhaps they know me for techno. All that should matter is whether something is good or bad. Period." Make no mistake however; all pigeonholing talk aside, when it comes to DJing, Stryke gets primal. He's considered to be one of the top DJs around today. His globetrotting schedule and growing legions of fans is proof positive of his ability to command dancefloors worldwide. His dexterity is proven time and time again. His live shows, while rare, are an even bigger treat. He's had Billboard chart success with his Ad Finem project and as a remixer. His guest vocal on the track "Time" with Murk, went #1 in the US in 2004. He's collaborated with artists such as Murk, Christian Smith, John Beltran, Santos, & Alex Flatner, to name a few. With releases on labels such as Ovum, Plastic City, Hooj Choons, Monoid, Circle, Guidance, Platform, Twisted, & many others, there seems to be no end in sight for this bright star. Over the years, his residencies have included nights at clubs such as the legendary Edge, Warsaw, Maze, & Nocturnal. In 2004, he was asked to be the official DJ for the MTV VMAs. Balancing work between the studio and the road hasn't been easy. But Stryke wouldn't have it any other way. "I'm truly blessed to be able to do what I love. The work, the stress, and the hardship is all worth it at the end of the day." Stryke is quickly becoming the hardest working man in electronic music. Listen...Communicate...Understand.