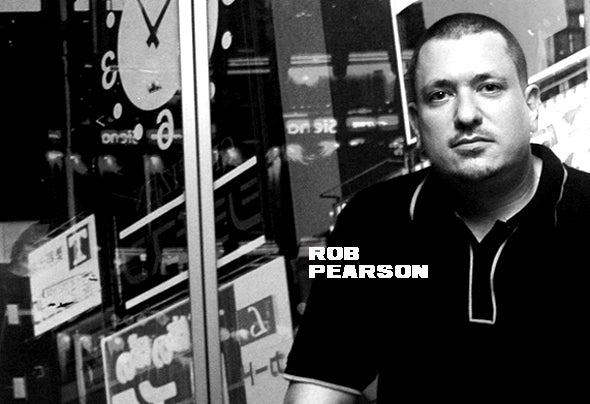 Rob Pearson’s dedication and contribution to the UK’s underground House scene is beyond question. Since the early 90’s, from his South London base (www.onlinestudios.co.uk) Rob has been responsible for helping to shape the Tech House sound synonymous with the capital. His productions have been released on genre-defining labels such as Plastic City, Reverberations and Swag Records, as well as his own long-running Evasive Records and it’s sub variants. After early successful forays into Drum & Bass, the influence of the Chicago and Detroit House and Techno scenes in the late 90’s provided the true focus and freedom for Rob’s developing style – a style that continues to develop to this day. Expertly covering the ground from deep, dark and drugged out House to slick, seductive and groovy Techno, Rob’s tracks and remixes have become a staple in the sets of every self-respecting ‘underground’ house DJ while also being licensed to countless mix CDs. Whether producing solo instrumental tracks or collaborating with world-renowned artists like Afrika Bambaataa, Robert Owens and Rose Windross (Soul II Soul), Rob consistently demonstrates his undeniable talent as a composer and producer with the ability to craft music that works as well for home listening as it does on gritty dancefloors. Rob’s own record bag is well travelled with regular London gigs in pretty much every venue of note, and trips further afield around the UK, to Europe and the USA, including the Miami Winter Music Conference. Whether headlining or supporting DJs like Danny Rampling, Paul Woolford, Yousef and Terry Francis, his sets are always eagerly anticipated. If the true test of any music producer, DJ and label owner is support from their peers, music buyers and packed out dancefloors, then Rob Pearson has proved time and time again that he excels at every aspect.