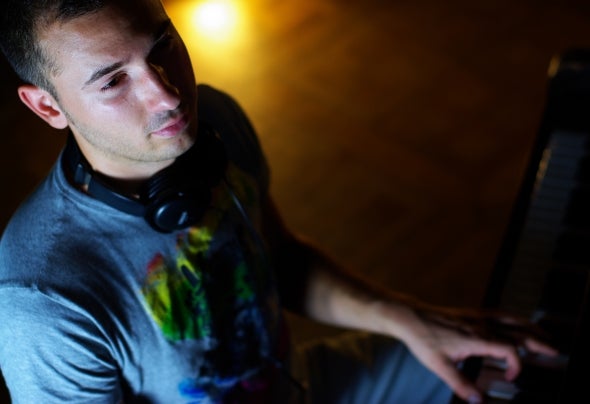 Martin Selle was born in 1985 in Bergisch Gladbach , Germany. His family is full of musicians, so music always played a very important role in his life. At the age of six years, he started to learn percussion instruments at the “Rheinische Musikschule”, followed by many years of studying the drums. He played in various bands and combos and got to know many different genres of music. He never wanted to be limited by only one way of making music.As a result, Martin is creative in Rock Bands, Jazz Combos and even Orchestras. The continuous search for new musical experiences is part of his identity, so falling in love with electronic music was only a matter of time. The results of this journey influence Martin’s productions today.With the age of seventeen, Martin spent a year in Austin Texas at a friend’s house who is a well known DJ. When returning back home, he was crazy about mixing and bought his first Turntables and started to love Vinyl. During that time, he also got his first Synthesizer and started to produce his own electronic music. Over the years he developed his own way to produce House and Techno Tracks."During my development as a musician and producer I understood that authenticity and intuition are the most important things in this business" Martin explains. "It doesn't matter what is hyped or trendy at the moment, your songs have to come right from your heart. Otherwise they are replaceable and will not last long in the memories of the people. It's really great to be able to share my music with others and experience that in each of my gigs."His sound combines harmonic and emotional elements with groovy rhytms with the goal to create songs that stay in mind and have an unique soul. "Artists like Stephan Bodzin proved that at the end it's the melodies that endure".Martin's first Vinyl-E.P. "Ilemy" (released on Akzent- Recordings) reached Nr. 1 of the Top 100 Underground Charts of Gemany's largest Online-Vinyl- Stores like DJ-Shop.de. Martin's "Institution" E.P. is his second Vinyl-Release and still very successful in the Club-Szene.Please visit the links below to listen to the releases and to see the comments from other Producers::Illemy E.P.:http://www.promote- records.com/share/HlVQLWk7SEu?rInstitution E.P.: http://www.promote-records.com/share/l_Y_m75Kt4Y